NEXT:Kellyanne Conway Tells Jake Tapper That She Was Sexually Assaulted
PREVIOUS:President Trump to ABC White House Correspondent Cecilia Vega: 'I Know You're Not Thinking. You Never Do' 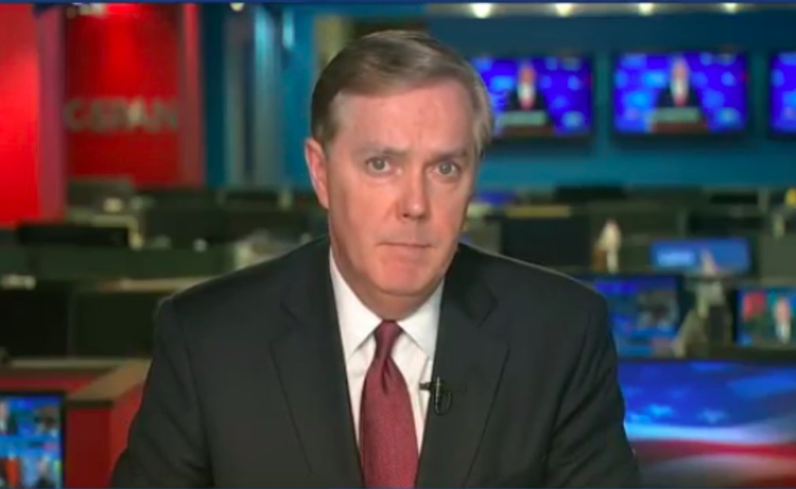 For C-SPAN, Thursday’s Judge Kavanaugh-Dr. Ford hearings might not have delivered a Fox News-esque total audience, but it was an extraordinary day for the cable channel in its own right.

C-SPAN’s famed morning call-in program Washington Journal was inundated with calls throughout the day, with women providing their own personal stories of sexual harassment and assaults as the Kavanaugh hearings transpired.

Washington Journal host, C-SPAN senior executive producer and political editor Steve Scully has been dubbed by one prominent TV personality as “the most patient man in America.” Over his years hosting Washington Journal, Scully has become accustomed to fielding calls from, shall we say, “colorful characters.”

But Thursday was different.

As HuffPost wrote, he moderated what turned into “an impromptu national town hall on sexual assault.”

How many calls did Scully receive?

“Well over a dozen,” he stated. “It was such an organic moment. It just happened. We didn’t plan it.”

Here’s part of the Q&A with HuffPost:

I wanted to ask you about the calls you got on Thursday ― a number of them were from sexual assault survivors. Just the sheer number of stories was pretty remarkable. Was that something that you were expecting?

No, it wasn’t something that we expected, but it also did not surprise us. We open our phone lines every day, every morning for our programming. During the course of the day, I think what we saw, though, was just the sheer, raw emotion from the testimony of Dr. Ford, and I kind of compare it to two things. We did the same thing after Anita Hill, but more recently, after 9/11. These just became moments where everyone was watching, everyone had an opinion, and the raw emotion bubbled up.

Once we got one call, it seemed like every other caller was another victim of sexual abuse, and that’s what was really so incredible. It just seemed to be a watershed moment.

What was it like inside C-SPAN? Was this something that people were talking about among themselves? It took a while, but then people said “Wow, have you tuned in? There’s something going on over there.”

I was on the set. Some people were saying, “Hey, this is really beginning to resonate.” We didn’t really change our approach. We had always planned on taking calls. Certainly, the social media lit up. I mean, look, I knew right away when we were getting these calls that we’d tapped into something. I’m out there. I’m taking the calls.

We were the pool cameras for the hearing itself, so not only did we have the responsibility of producing our own coverage, but everything that you saw on all the networks came from the C-SPAN cameras. Really, our primary focus is to make sure that we have everything in place so that the cameras were working and the coverage was first-rate, because ABC, NBC, CBS, Fox, CNN ― everyone was counting on C-SPAN to make sure we do a first-rate job. So that was our primary focus.

But yes, once we started to get the calls ― I don’t know what the final number was, but well over a dozen women called in expressing their own shame or anger at being a victim of sexual abuse. And they were all very ― they showed emotion, but they were all very thoughtful and very clear and in many ways mirrored what we heard from Dr. Ford. Because she also said, “I don’t remember all the details but I remember what happened.”

Another viewer called and said, “I remember I was abused at a beach. I can’t tell you exactly where it was, but I can tell you exactly what happened.” That was interesting that we had those parallels. Conversely, we had a lot of people who said the Democrats are wrong to do this and they were critical of Senate Judiciary Committee Democrats and [said] Judge Kavanaugh is being smeared, so we heard that as well.