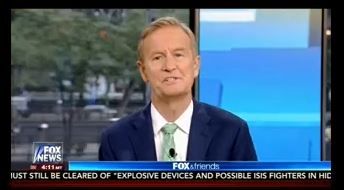 As we told you yesterday, the show mischaracterized a report in The Hill about a memo James Comey leaked to his friend, related to a conversation Comey had with the president. The Fox News morning show called it “a bombshell report” suggesting that Comey “may have actually broken the rules” and put “our national security at risk.”

A half hour after that on-air report, and tweet, President Trump tweeted “James Comey leaked CLASSIFIED INFORMATION to the media. That is so illegal!”

But the memo Comey gave to his friend, to then pass on to the New York Times, was not classified… not then and still not now. Here’s Doocy’s correction:

Yesterday on this program we aired and tweeted a story saying former FBI director James Comey leaked memos containing top secret information. We were mistaken in that. According to a report half of the memos contain information classified at the secret or confidential level, not Top Secret. Documents in which Mr. Comey leaked are at this point unclear. Just wanted to straighten that out.