NEXT:Friday, Aug. 21 Scoreboard: With the DNC Complete, Fox News Returns to No. 1 Across the Board
PREVIOUS:Saturday, Aug. 22 Scoreboard: Jeanine Pirro Is Most Watched, Greg Gutfeld Is No. 1 Among Adults 25-54 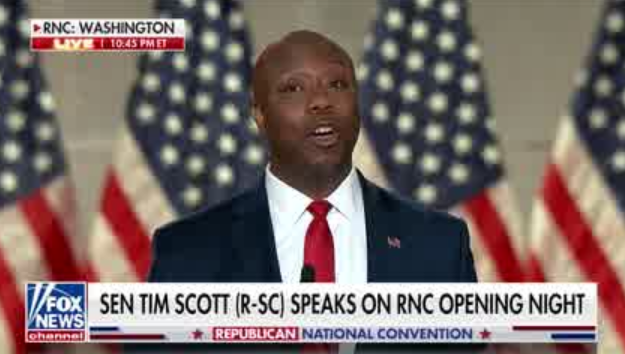 Opening night of the partially virtual 2020 Republican National Convention is in the books, and it featured a lot of Donald Trump.

During the first hour, it seemed like the commander-in-chief was featured every five minutes.

That wasn’t the only difference between the RNC and DNC on opening night. There were a ton of speeches this evening, and not much in the way of entertainment value. All in all, it seemed more toned down (not necessarily a bad thing), with the exception being Kimberly Guilfoyle‘s speech (we’ll get to that later).

The RNC leaned heavy into the theme of race this evening, perhaps as a way for the president and his core supporters to fire back at claims of racism. To date, the president’s record on race has been questionable, at best.

Something tells us the Republican Party will continue to target this audience over the next three days, hoping to at least pick up a few percentage points in the demo.

Sen. Tim Scott of South Carolina concluded the evening. Here’s an excerpt from his address, which received praise from multiple TV newsers.

“After spending some time in local government, I decided to run for congress in 2010. The district is based in Charleston, South Carolina where the Civil War started, against a son of our legendary senator Strom Thurmond. You may be asking yourself, how does a poor black kid from a single parent household run and win in a race crowded with Republicans against a Thurmond? Because of the evolution of the Southern heart. In an overwhelmingly white district, the voters judged me not on the color of my skin but on the content of my character. We live in a world that only wants you to believe in the bad news. Racially, economically and cultural polarizing news. The truth is, our nation always bends back to fairness. We’re not fully where we want to be, but I thank God almighty we’re not where we used to be. We’re always striving to be better.”

Tim Scott was very very good. And he’s a good man. I appreciate his voice.

Tim Scott personifies the American Dream. His is the uplifting, can-do story that has always made America great. It always will.

However, not everyone was impressed with Senator Scott:

What is so hard about this speech is that Tim Scott is a smart man. And knows full well that Trump is a bigot and hasn’t done half the things he’s giving him credit for tonight. But this is the modern GOP. JC Watts is turning over in his political grave #RNC

The RNC opened amid another round of mass protests over a police shooting of a Black man named Jacob Blake. Neither Sen. Scott nor former U.N. ambassador Nikki Haley mentioned the events in Wisconsin during their live speeches.

The convention started off with an introductory video voiced by Trump supporter, actor Jon Voight. The video was a montage of Americans from all walks of life doing extraordinary things. Predictably, there were a few shots taken at Democratic Party politicians during the reading. Voight added: “When we elected Donald Trump, we chose a different path. A man who cares, who loves America and all Americans. A man who works tirelessly … for you. It takes a true leader to solve problems. Full economic recovery. Despite unpredictable events, we as Americans work to overcome challenges and write our own stories. Land of promise …”

Archbishop of New York Cardinal Timothy Dolan opened the event with a prayer, and then tossed to a World War II veteran named Stephen Melnikoff who said the Pledge of Allegiance.

The first speaker from the Mellon Auditorium was Turning Point USA founder Charlie Kirk, a millennial conservative political activist. Other speakers included an advocate for school choice, an owner of a small business in Montana. who spoke glowingly about the coronavirus relief paycheck protection program loan she received, and later Rep. Matt Gaetz. Following the Florida congressman was a taped message from Maryland congressional candidate named Kim Klacik, who spoke about how “Democrats have failed Baltimore for 50 years,” and that’s why residents should support her candidacy. Klacik is running in the district the late Elijah Cummings represented for many years.

The overwhelming majority of RNC Night 1 speeches were taped, including those mentioned above. You might recall President Trump calling out Michelle Obama last week for pretaping her Night 1 DNC speech.

RNC chair Ronna McDaniel then took to the podium for the first live address of the night. She proceeded to slam the Democratic Party’s convention and accused the participants of focusing too much time attacking the president and not enough time on outlining their policies.

On Fox News, Tucker Carlson was hosting his 8 p.m. program before the festivities kicked off at 8:30. At 8:30, his show was preempted for the opening segments of the RNC, but he returned later in the hour, when Kirk took to the podium, and proceeded to interview Louisiana Senator John Kennedy. Carlson concluded his hour with Fox News senior political analyst Brit Hume, who remarked that the GOP showed “optimism, diversity and strong women” during the first 25+ minutes.

It was Sean Hannity‘s turn at 9 p.m. He said the DNC versus RNC was tantamount to “a college Zoom class comparison to what looks like a real set, real convention.”

Hannity’s guests included Karl Rove and Ari Fleischer, the latter of whom wondered aloud what the ratings were going to be like for this event and if they would beat the 2020 DNC ratings and outperform 2016.

Both praised the patriotic videos that played, with Fleischer adding (with a half smile), “No one does patriotism better than a Republican Party convention!”

Unlike Fox News, CNN didn’t leave the RNC video for any studio coverage until the 9:15 p.m. ET mark, with Wolf Blitzer and Dana Bash entering just as the RNC video played a message from Rep. Jim Jordan, and then throwing to commercial.

On a more serious note, MSNBC made a point of not broadcasting the medical portion of the RNC video and speakers talking about the coronavirus.

This came at around the time that the RNC aired video of Trump speaking with professionals and first responders—from healthcare workers to postal workers—who have been on the front lines and revealed that he had taken hydroxychloroquine, zinc and a Z-pack to ward off coronavirus.

Rachel Maddow brought in medical experts to discuss what was being said, and pointed out inaccuracies. At one point, she remarked, “I hope we don’t have to keep doing this all night.”

Other speakers included former NFL running back Herschel Walker, who spoke about his 37-year-long friendship with Trump and said he is friend, not a racist. Democratic lawmaker Vernon Jones expressed his support for President Trump and remarked that the Democratic Party had become “a party of intolerance.” 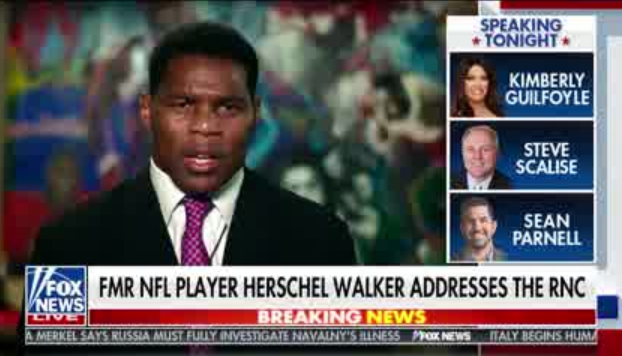 Next, the issue of guns. Needless to say, the Republicans hold a very different stance on the issues than the Democrats. Andrew Pollock, whose daughter was killed in the Parkland shooting, delivered a message from the stage. He was followed by the duo of Patricia and Mark McCloskey, who became well-known after video surfaced of them pointing a massive gun at a group of protesters outside of their mega-mansion in St. Louis. They delivered a taped video message from their home. “Not a single person in the out-of-control mob you saw at our house was charged with a crime.,” they said, “But you know who was? We were. They’ve actually charged us with felonies for daring to defend our home.”

Then came former Fox News host Kimberly Guilfoyle, who gave what was arguably the darkest but certainly the most enthusiastic speech of the evening:

“[Joe] Biden, [Sen. Kamala] Harris and the Socialists will fundamentally change this nation. They want open borders, closed schools, dangerous amnesty and will selfishly send your jobs back to China while they get rich. They will defund, dismantle and destroy America’s law enforcement. When you are in trouble and need police, don’t count on the Democrats.

A first generation American, I know how dangerous their socialist agenda is. My mother was a special education teacher from Puerto Rico. My father also an immigrant came to this nation and pursued the American dream. Now i consider it my duty to fight to protect that dream.Rioters must not be allowed to destroy our cities. Human sex drug traffickers should not be allowed to cross our borders. The same socialist policies that destroyed places like Cuba and Venezuela must not take root in our cities and our schools. If you want to see the socialist Biden-Harris future for our country, look at California. It’s a place of immense wealth. immaculate environment. The Democrats turned it into riots in streets, heroin in parks and blackouts in homes …”

(Note: Guilfoyle’s ex-husband is the current governor of California.) 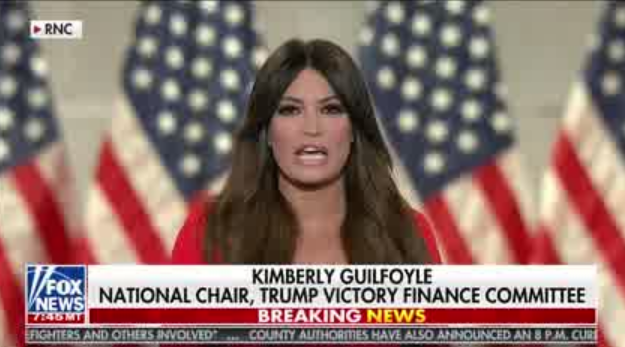 Hannity referred to the speech as “impassioned,” while Blitzer called it “forceful,” to which Jake Tapper replied, “Forceful is one word for it.”

At the top of the 10 p.m. hour, the RNC replayed the opening video voiced by Voight, followed by a taped appearance with six now-former hostages that were released during his administration: Michael White, Sam Goodwin, Pastor Andrew Brunson, Joshua and Tamara Holt, and Pastor Bryan Nerran.

“We bought back over 50 hostages from 22 different countries … and there are more we want to get back,” Trump said.

However, the president did make one curious remark to Pastor Brunson, who was held by the Turkish government for two years, saying, “To me, President Erdogan was very good.”

Haley then spoke. She attacked Democrats on numerous fronts before claiming that “in much of the Democratic Party, it’s now fashionable to say that America is racist. That is a lie. America is not a racist country.”

Nikki Haley is talented, made compelling arguments and should have a future in GOP politics. But saying things like Donald Trump “has a record of strength and success” in foreign policy dings her credibility. #RNCConvention

a) effective politician, could definitely sell trumpism with a human face

So did I hear that right….Nikki Haley says America is not racist and then describes how she experienced racism herself?

Don Trump Jr. probably doing the most among any one tonight to hammer home the populism themes that helped his dad in 2016. Don’t know if he’s the best messenger on this. But I think his message is probably the most effective of the night so far.

On @CNN, @jaketapper makes a very good point about @DonaldJTrumpJr‘s speech, which didn’t include any personal testimony about Trump père:

“This is really a political speech that could have been given by anyone in the Trump administration.”

The media will give Haley speech props, still thinking it’s the 2008 Republican Party, but this Don Jr speech will hit a far stronger chord with base Trump voters.

At one point during his speech, Trump Jr. referred to Biden as “The Loch Ness Monster of the swamp,” a line that could get cable news play in the imminent future. 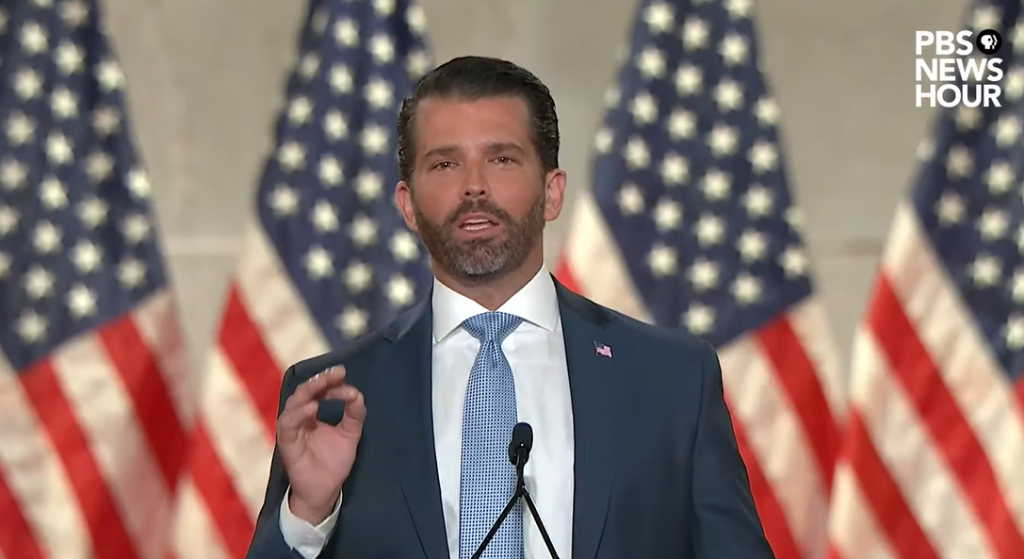 “Our family went from cotton to Congress in one lifetime.”
–@TimScottSC

Fox News contributor Karl Rove thought some of the most notable moments from opening night came from nonpoliticians. “They were people like Herschel Walker. I was taken by the father of the Parkland shooting victim. I was taken by the group of first responders and everybody from a truck driver to nurses.”

Arnon Mishkin from the Fox News Decision Desk just might have summed it up the best:

Many messages tonight: Dems are socialists…they authored the crime bill…they let cities run wild…immigrants are good…suburbs are about to be destroyed. Many messages but unclear themes.