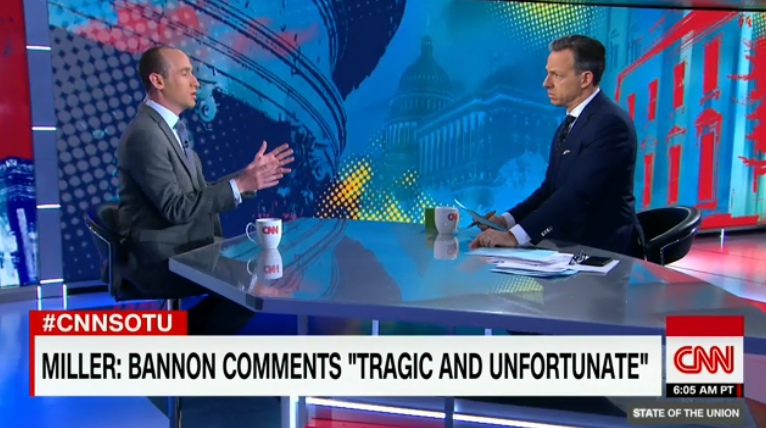 An interesting side story to the heated Stephen Miller–Jake Tapper encounter today on State of the Union.

After Tapper abruptly ended the interview, and had Miller’s mic cut off, CNN staff politely asked the White House senior adviser multiple times to leave the State of the Union set.

Miller apparently didn’t take kindly to those requests, and he ended up having to be escorted out by building security.

Business Insider was first to report.

The Trump White House and CNN have developed quite a contentious relationship since Inauguration Day, and Miller’s appearance on the CNN Sunday show didn’t ease any tensions.

Perhaps that was the point, at least from the White House’s side.

During the in-studio sit-down, Miller was asked about various claims made in Michael Wolff‘s highly-scrutinized and publicized book Fire & Fury, which details life during the transition period and early days of the Trump White House.

The White House consistently denies the veracity of the claims made in the book, and Miller didn’t seem interested in answering Tapper’s questions about it. He decided to respond by criticizing CNN’s coverage of the administration (at one point calling Tapper “condescending”), while singing the praises of the president.

“The reason why I want to talk about the president’s experiences,” Miller said. “What I’ve seen with him traveling to meet dozens of foreign leaders with his incredible work. You have 24 hours a day of anti-Trump material, you’re not going to give three minutes for the American people to get the real experience of Donald Trump.”

Miller defended Trump’s Saturday tweet where he referred to himself as “a very stable genius” after some TV newsers publicly deemed him “unstable” based on various anecdotes from the book.

At one point, Miller referred to his boss as “a political genius.”

Tapper noticed the tactic, was tired of not having his questions answered, and decided to shut the interview down rather abruptly.

“I get it. There’s one viewer that you care about right now, and you’re being obsequious. You’re being a factotum in order to please him. And I think I’ve wasted enough of my viewers’ time,” said Tapper, before having Miller’s mic cut off.

President Trump responded to the interview shortly after its completion.

Jake Tapper of Fake News CNN just got destroyed in his interview with Stephen Miller of the Trump Administration. Watch the hatred and unfairness of this CNN flunky!