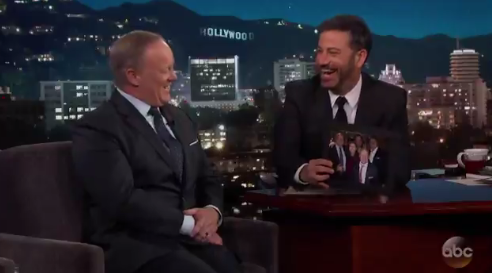 A former member of the Trump administration is dancing his way back into the spotlight.

ABC announced today on Good Morning America that former White House press secretary Sean Spicer is going to compete on the next season of Dancing of the Stars.

.@seanspicer will compete on the new season of @DancingABC!#DWTS#DancingOnGMAhttps://t.co/iiWtUzxXl2 pic.twitter.com/cJ9XmrEl3T

Roll Call’s Katie Pavlich asked Spicer in July 2018 if he would ever consider joining the show, to which he responded:

July 24, 2018 — @KatiePavlich: “Everybody wants to know if you are going to be on Dancing with the Stars. This is a yes or no question…”@SeanSpicer: “It’s no. Zero on the rhythm. I wouldn’t do that to viewers.”#DWTS#DancingOnGMA pic.twitter.com/i9FgcN5lt0

There have been a number of TV newsers to appear on the program over the years, most recently Geraldo Rivera in 2016. He was the first celebrity eliminated from season 22. ABC News chief meteorologist Ginger Zee was also on that season.

Former NBC News correspondent and one-time host of the syndicated entertainment show Extra Maria Menounos was on season 14, as was Sherri Shepard, when she was co-host of ABC’s The View.

Nancy Grace was a DWTS participant while at HLN, and was eliminated in Nov. 2011 after making it to the top five.

Tucker Carlson was on the program in fall 2006 while he was at MSNBC.