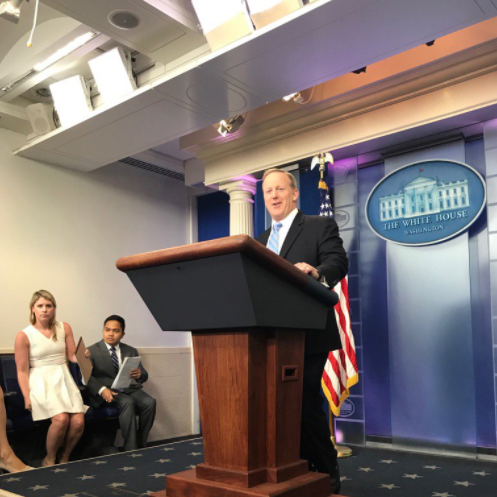 Acosta and Spicer reportedly went back and forth over the lack of TV coverage during today’s briefing. When Acosta attempted to shout a question about the healthcare bill to Spicer, the press secretary initially ignored him.

“The camera is off, Jim,” said Spicer, who recently accused reporters of trying to become “YouTube stars.”

“Why don’t we turn the cameras on?…The cameras are right here.”

I asked Spicer if we could turn the cameras on at today’s briefing. He ignored the question.

He expressed a similar sentiment today:

Like the off camera briefing, this is an attempt to get the coverage without the accountability. https://t.co/VFrEsmx4W5

Despite the off-camera nature of today’s briefing, Spicer did permit news organizations to take photos.

“I’m putting sketch artists out of business now,” Spicer quipped, undoubtedly referring to the decision made by Acosta’s network to send its sketch artist Bill Hennessy to Friday’s audio-only briefing.

Previously, media organizations were not allowed to take photos of the White House spokesman or show video from the briefing.

Here’s a photo taken by Acosta:

This is not campaign event. This is the WH. We are sitting in a briefing room full of cameras and taxpayer funded spokesman at podium. https://t.co/73a23TIVOx

CNN (and others) aired audio of the presser after it ended. Acosta told CNN Newsroom’s Ana Cabrera why he continually asked Spicer to turn on the cameras.

“Make no mistake,” he said, “this is the gradual erosion of the expectations of the traditions that have been in place in this city for about a quarter of a century, that these briefings be held on camera.”

“I think that we just need to recognize what’s happening here, and that is what we are typically accustomed to in this town, in terms of covering the White House, covering the United States government, that is being eroded away right in front of our eyes.”

White House Correspondents’ Association president, Jeff Mason, of Reuters, reportedly met with Spicer and deputy press secretary Sarah Huckabee Sanders last week to express concerns about this shift. Apparently, this was one concession made by the White House communications team, though it’s unlikely to appease the WHCA.

CBS News’s Mark Knoller tweeted out the off versus on-camera briefing count for June to-date.

In terms of actual news from the presser itself, Spicer reportedly noted that the president was scheduled to speak in the Rose Garden this afternoon with Indian pm Narendra Modi. “I want his voice to carry the day,” Spicer said.
< Previous Article
Next Article >
Advertisement
Advertisement
Get TVNewser delivered straight to your inbox
Advertisement