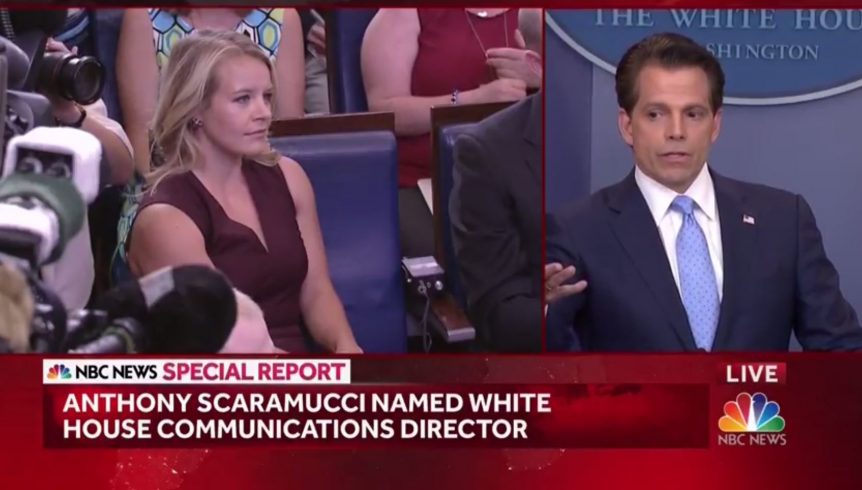 Despite being a former cable news host, Anthony Scaramucci forgot the first rule of live TV. If your mic is on, someone is listening.

In between interviews across the Sunday shows, Scarmucci was overheard talking about his debut White House press briefing Friday in which he spent more than a half an hour answering reporters’ questions, including CNN’s Sara Murray. In his answer to Murray, he reminded her of the network’s recent bad reporting about him, which cost three people their jobs.

“You know, you guys said something about me that was totally unfair and untrue. You retracted it and issued me an apology and I accepted the apology immediately,” Scaramucci said to Murray.

Well on Sunday, as BuzzFeed reports, Scaramucci explained why he called on CNN:

“In the back of my mind I have to call on CNN and send a message to [CNN President Jeff] Zucker that we are back in business,” Scaramucci said, according to the transcript obtained by BuzzFeed News. He referred to Zucker having “helped me get the job by hitting those guys,” a reference to the network’s decision to force the resignation of three employees over a retracted Russia article that mentioned Scaramucci.

Scaramucci confirmed to BuzzFeed News that he made the comments and said that some of his colorful remarks were jokes.

In 2015, Scaramucci acquired, then named himself host, of the long-running PBS program Wall Street Week. It aired mostly on Fox affiliates for about a year before moving to Fox Business Network, which now owns the show. Maria Bartiromo is now host.