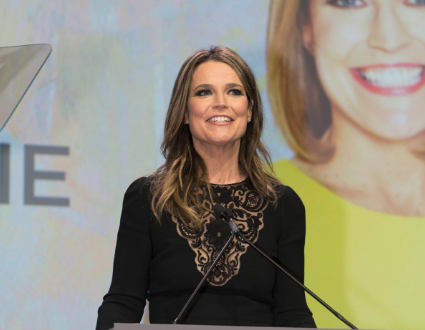 The Matrix Awards is an annual celebration honoring outstanding women in communications. The 2017 ceremony, organized by the New York Women in Communications, took place yesterday afternoon at the Sheraton Times Square hotel in New York.

Today co-host Savannah Guthrie and Gretchen Carlson were among this year’s honorees.

Guthrie was introduced by Today co-anchor Matt Lauer, who claimed it was his duty “by law” to give his colleague a roast. Lauer brought up Guthrie’s taste in music (“monotonous and melancholy acoustic guitar riffs”), and described her as someone “always falling over things and hurting herself.”

“She’s a cool chick,” Lauer said. “I know that expression might get me banned from future Matrix Awards, but it’s true.”

Lauer then got a bit more serious, saying “there is nobody who has ever assumed the role of Today anchor who has come to this job more qualified than Savannah Guthrie. No one has ever brought a better resume to this job.”

“I got here just being a woman…I have worn my heart on my sleeve. I have wondered if I am good enough. I have felt like I am on the ballot every day. I have hated my hair. I have compared myself to others and lost. I have let them see me sweat. I have even let me see me cry… I’ve worked hard, I’ve put in the hours…I’ve grown two humans in my belly…I’ve been lucky and I have been blessed,” remarked Guthrie.

Just days after being named to the TIME 100, Gretchen Carlson was honored at the Matrix Awards for taking a stand against Fox News when she went public with a sexual harassment lawsuit against Roger Ailes last July, which ultimately led to his departure from Fox News and a significant settlement for Carlson.

“Gretchen Carlson is the bravest woman I know, and I know a lot of brave women,” producer/director Paul Feig said during his intro of Carlson. “She created an avalanche we are still feeling the fallout from today — thank God.”