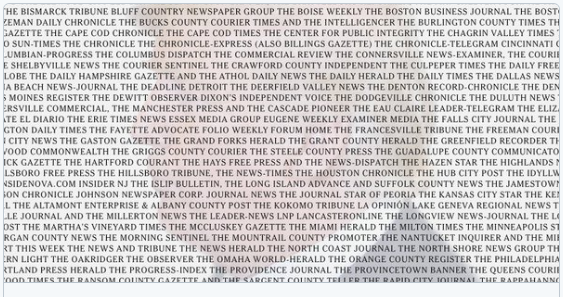 The relationship between the American news media and the current administration has been one of conflict. President Trump consistently expresses his displeasure with how the media has covered him since he took office in 2017. He even once tweeted that the media is “the opposition party,” and the “enemy of the people.”

Boston Globe deputy editorial page editor Majorie Pritchard  has led an effort to push back these attacks. Said efforts have led to roughly 350 publications coming running editorials today expressing their support for and the importance of a free press, and to affirm to the American people that journalists are not “the enemy of the people;” that their job is to inform all Americans.

The New York Times’ feature – “A Free Press Needs You” – rounded up newspaper editorials from across the country, places like Tucson, Martha’s Vineyard, Seattle and Tampa Bay.

Trump’s reaction to the Globe’s effort was to fight back against these editorials that are criticizing him for attacking them:

The Boston Globe, which was sold to the the Failing New York Times for 1.3 BILLION DOLLARS (plus 800 million dollars in losses & investment), or 2.1 BILLION DOLLARS, was then sold by the Times for 1 DOLLAR. Now the Globe is in COLLUSION with other papers on free press. PROVE IT!

THE FAKE NEWS MEDIA IS THE OPPOSITION PARTY. It is very bad for our Great Country….BUT WE ARE WINNING!

Later in the morning, he seemed to change his tune. Kind of:

There is nothing that I would want more for our Country than true FREEDOM OF THE PRESS. The fact is that the Press is FREE to write and say anything it wants, but much of what it says is FAKE NEWS, pushing a political agenda or just plain trying to hurt people. HONESTY WINS!