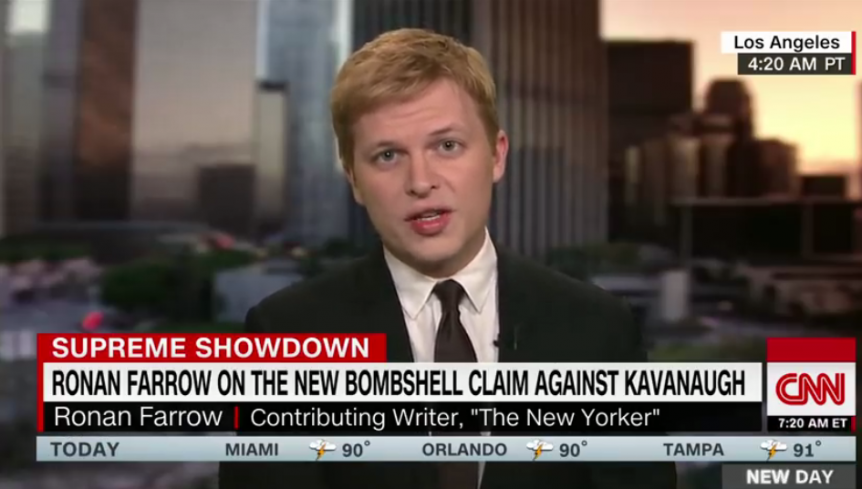 Investigative journalist and contributing writer for The New Yorker Ronan Farrow hinted at there being “additional information coming to light” regarding the allegations that have been leveled against Judge Brett Kavanaugh.

“These past few weeks with the playing out of the Brett Kavanaugh story, we have seen every painful detail given by some very brave, very credible people thrown into a partisan inferno,” Farrow remarked during a session at The New Yorker festival yesterday evening.

Farrow asserted that his stories are “careful, fact-based investigations.”

“We are seeing every shred of information spun, weaponized and turned into a political football, and while I can’t talk about anything but reporting that we have vetted, published and put out, I will say just based on the reporting that is already out there, it is very clear that the effect that partisan sniping has had on the potential for additional information coming to light,” said Farrow. “It is very clear, based on what’s out there, that there is more information that we could have, and that there are more sources who might come forward, in a different context.”

Farrow also reflected on the days and months before the Harvey Weinstein story was published.

He talked about how all of the work he had put into the Weinstein investigation over the year, while incredibly important, and something he was proud of, was also incredibly time consuming and not really helping him from a career standpoint.

“I was kind of rock bottom career wise, and as a result of tackling the Weinstein story as doggedly as I did and refusing to stop doing that story, my career fell apart completely,” said Farrow. “There was a moment, a year ago today, when I did not have the institutional support of my news organization. My contract was ending and after I refused to stop those interviews, I did not have a new one. My book publisher dropped me, refusing to even look at even one page of a manuscript I had labored over for years; I found out that another news outlet was racing to scoop me, and that I was falling behind.”

Farrow didn’t even know if all of this work would even amount to a story because “I had spent a year in rooms with executives telling me for a year that this did not matter; that no one would ever listen.”

Those executives were allegedly from NBC News (though the network continues to deny the allegations made against them).

Farrow also talked about how he had moved out of his home, was being threatened, was having legal threats leveled at him by “a really powerful guy.”

“I’m not being falsely humble here, this was a moment a year ago for me personally where that I didn’t know if I was going to have a job in journalism in two weeks, or a month, or frankly ever again,” said Farrow, a 2018 Pulitzer Prize winning journalist.

What a difference a year makes.