NEXT:Pres. Donald Trump Will Have Lunch with Network Anchors
PREVIOUS:TV Newsers and Politicians React to the Death of Roger Ailes

Roger Ailes who over 19 years built Fox News into a powerhouse TV channel, before leaving in disgrace last year, has died.

“I am profoundly sad and heartbroken to report that my husband, Roger Ailes, passed away this morning,” reads a statement from his wife Elizabeth Ailes. “Roger was a loving husband to me, to his son Zachary, and a loyal friend to many. He was also a patriot, profoundly grateful to live in a country that gave him so much opportunity to work hard, to rise—and to give back.”

Ailes, who had hemophilia, fell and hit his head at his home in Palm Beach last Wednesday.

In his authorized biography published in 2013, Ailes said, “My doctor told me that I’m old, fat, and ugly, but none of those things is going to kill me immediately. The actuaries say I have six to eight years. The best tables give me 10. Three thousand days, more or less.” Ailes was 72 at the time.

All the cable news networks have been covering Ailes’ sudden death. Fox News reported the news at 8:40 a.m., citing the Drudge Report. Ainsley Earhardt got choked up reading Elizabeth Ailes’ statement. “Beth you are in our thoughts and prayers. Roger rest in peace,” Earhardt said.

MSNBC’s Joe Scarborough reported the news two minutes later. As Scarborough read the news, you could hear a gasp from another guest. “If you want to look at the two people that impacted American culture and politics, over the past 20 years, you would look at Steve Jobs, and Roger Ailes.”

Chris Matthews said he was planning on calling Ailes to check up on him: “He’s done bad things. Been through bad things, but he got me started in cable television back when he was running CNBC and America’s Talking. I think the reason he succeeded with Fox in the beginning he’s the kind of guy that would watch Fox. He rooted for his network because that’s what he wanted to watch.”

Andrea Mitchell added: “I first met Roger Ailes. I was right out of school, 1968 in Philadelphia. He was the producer of The Mike Douglas Show. I would see him all the time. After that is when he first hooked up with Richard Nixon and did that ’72 campaign. And he was dynamic.” 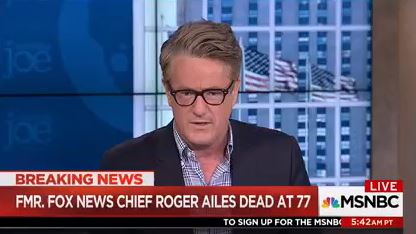 “At the very top of the show I said ‘God knows what’ll happen today’ because there’s so many things happening. And Roger Ailes passing at the age of 77. He was at CNBC a long time and he changed the face of news and cable news for certain,” said CNBC’s Joe Kernen who worked with Ailes. 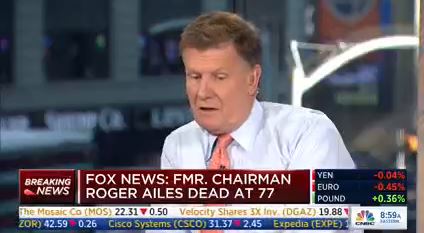 “We have some incredibly sad news to report Fox News and Fox Business pioneer Roger Ailes has died,” said Dagen McDowell on FBN. 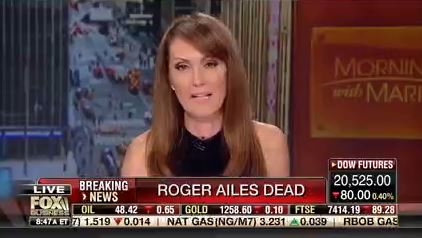 All three network morning shows also reported the news with network-wide special reports toward the end of their 8 a.m. hours. Gabe Sherman, who wrote an unauthorized biography of Ailes, and who is under contract with NBC News, called into the Today show. “It’s a very complicated story. He’s, on one hand, a genius, but also a very tragic. And many some ways, his quest for power consumed him,” said Sherman. 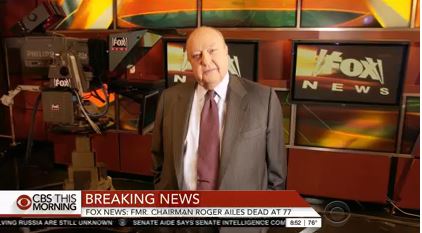 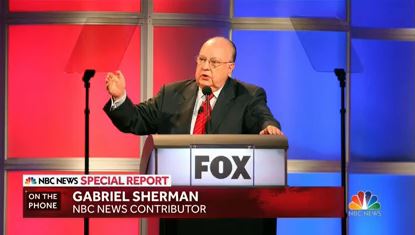 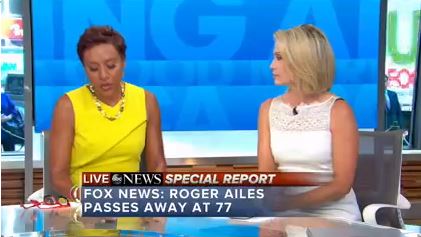 And more from Fox & Friends:

Rest in Peace, Roger Ailes. Thank you for being such an amazing mentor and friend. I will forever be grateful for your guidance and support. pic.twitter.com/EYlJK0zYx3