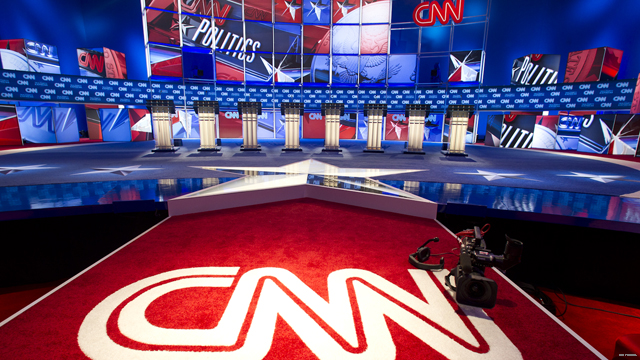 CNN has been hyping up its two-night Democratic presidential primary debate broadcast for weeks now, including with a prime time “selection show” type broadcast last Thursday, where the candidate lineups for both nights were chosen during a live, random draw.

The network does seem to be viewing next week’s debates similar to a televised sporting event, and apparently that extends to ad sales.

According to Variety’s Brian Steinberg, CNN is requiring an commitment of $300,000 in advertising on the network before a potential sponsor can even purchase commercials within the two debate telecasts on July 30 and 31st (next Tuesday and Wednesday) from Detroit.

The minimum requirement is reportedly pegged at around $300,000, while a 30-second spot airing in the debates is seen costing around $110,000.

Compare that with a 30-second ad in CNN’s prime time daypart, which over the last few months has cost between $7,000 and $12,000, according to SQAD MediaCosts.

But to be fair, this debate, on paper, should deliver a far larger audience than the ~900,000 viewers who watch CNN prime time on a given Tuesday/Wednesday.

Night No. 1 of NBC’s Democratic debate hauled in 15.3 million viewers, and night No. 2 hauled in 18.1 million. CNN certainly hopes to approach those viewing numbers.

According to Steinberg, the total costs would likely total more than a package of commercials on The Walking Dead, or the price of a 30-second commercial in the most recent season of Empire on Fox or the final season of The Big Bang Theory on CBS.

Those NBC debate figures are similar to what Big Bang averaged in its final season.

Has the network been successful so far?

“I will tell you, we are nearly sold out,” WarnerMedia ad sales chief Katrina Cukaj told Steinberg. “We’ve got a couple of pending accounts still in there, but we are going to be done pretty much any day now.”

Who is advertising on the broadcast?

Not surprisingly, it’s movie studios. We are in the summer months, after all!

Four different studios are slated to advertise during the event, she [Cukaj] said, with Walt Disney’s 20th Century Fox running TV ads and buying a home-page takeover of CNN.com on desktop and mobile for its sci-fi drama “Ad Astra,” which stars Brad Pitt. Movie studios haven’t typically been the biggest advertisers on cable-news networks, which rely on pharmaceutical commercials and direct-response ads to fill a good chunk of their schedules, though CNN has made efforts to win more movie advertising with its documentary programming.