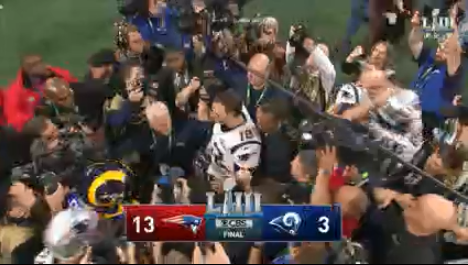 Over the weekend, we asked you, the reader, how many viewers you thought would tune in to Super Bowl 53 (LIII) between the New England Patriots and the Los Angeles Rams. An overwhelming majority of you felt fewer than 103 million would tune in, down from last year’s total of 103.4 million.

Well, 67 percent of you were correct.

According to CBS, roughly 100.7 million tuned into Super Bowl LIII to watch the Patriots eventually earn their record-tying 6th Super Bowl title, with a 13-3 win over the Rams, tying the Pittsburgh Steelers for the all-time record.

Super Bowl LII on NBC between the Eagles and Patriots drew roughly 103.5 million viewers on linear.

If one looks exclusively at the English language linear TV-viewing audience, CBS pulled in an average audience of 98.2 million viewers from 6:32 p.m. ET to 10:05 p.m. ET, per most current data from Nielsen.

That figure represents the lowest viewer total of any Super Bowl telecast since Super Bowl 42 (XLII) featuring the Giants and Patriots. That game, perhaps best known for the Giants’ extraordinary comeback, and the David Tyree “helmet catch,” took place 11 years ago to the day, and aired on Fox. It averaged 97.45 million TV viewers.

NBC owns the all time Super Bowl viewership record, as 114.4 million tuned to watch the Patriots and Seattle Seahawks square off in 2015 for Super Bowl XLIX.

NFL regular season viewership was up in this season vs. the prior season, which in theory should have been a good omen for last night’s game. Unfortunately for the NFL and its partners (including CBS), points were at a premium on Sunday night, and while the “defense wins championships,” axiom held true, unfortunately for the networks, low point totals and/or blowouts don’t traditionally spell victory in the ratings. In fact, they often lead to channels being changed, and that’s especially true in 2019 when there are so many viewing options in Sunday prime time.

Throw in the fact that you have a New England Patriots squad that most outside of the Northeast are sick of seeing in the Super Bowl, and a Rams squad that has little following in general, and this was always going to be a ratings challenge.

With all of that said, getting 100 million Americans to pay attention, at least for a few minutes, is an extraordinary feat, and this will still be by far the most-watched TV telecast of the calendar year.

Nothing wrong with that.

Next up is Fox Sports, which will air Super Bowl LIV, scheduled to take place at Hard Rock Stadium in Miami on Sunday, Feb. 2, 2020