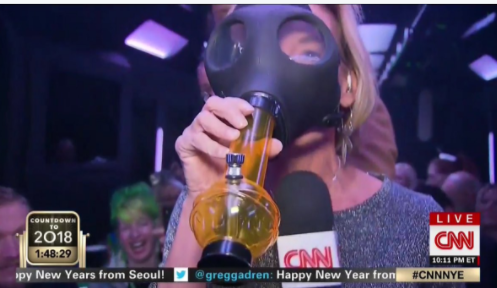 Interest in this year’s CNN New Year’s Eve Live broadcast was heightened due to the addition of Andy Cohen and the subtraction of Kathy Griffin as Anderson Cooper‘s co-host.

But one of the biggest stories to come out of this year’s special didn’t involve the Cohen-Cooper dynamic, or the usual Don Lemon-Brooke Baldwin hijinks down in New Orleans. Instead, it was Randi Kaye who stole the show this year.

The AC 360 correspondent reported from the Mile High city of Denver last night on how some locals decided to celebrate New Year’s Eve. She was aboard a party bus full of weed enthusiasts (a “cannibus”).

Marijuana is of course legal in the state of Colorado.

At one point during the broadcast, Kaye showed off a gas mask with a bong attached to it, and explained to Cohen and Cooper, who were back in Times Square, exactly how the piece worked.

Kaye, who didn’t inhale, later handed it off to a reveler, who proceeded to take a pretty big hit from the mask bong as Kaye lit the bowl.

Later in the show, “Kush Kaye” (which became her nickname at one point) reported from a puff, pass, and paint party. She once again decided not to smoke the joints handed to her, though it was clear there was ample weed for everyone else.

Below is a montage of Kaye’s most memorable moments from the broadcast. Later this week, we’ll have a larger roundup on Cooper and Cohen’s performance, as well as how other cable and broadcast networks covered New Year’s Eve.

.@RandiKayeCNN is on assignment on a “Canni-bus” in Denver, where revelers are ringing in the New Year by getting high #CNNNYE https://t.co/9WUEeYKMFi