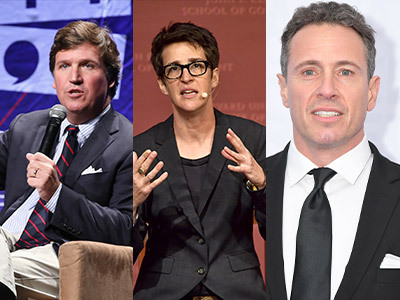 CNN was the most-watched cable news network for the month of January, followed by MSNBC and Fox News in that order. CNN and MSNBC hadn’t ranked No. 1 and No. 2 in total viewers in 20 years.

Her 9 p.m. MSNBC show finished No. 1 in total viewers for the month of January, and has been No. 1 on cable news for 17 consecutive days, dipping into the month of February.

As per Nielsen data, here are the top 25 regularly-scheduled cable news shows for the month of January, sorted by average total viewers. This data does include time-shifting and excludes re-airs.

MSNBC had 7 of the top 25 most-watched regularly scheduled cable news shows for January. Fox News had six, while CNN had a 12. CNN’s daytime coverage has performed averaged especially large audiences in recent months, lifted by coverage of the election, the insurrection on the U.S. Capitol, the inauguration, and of course, the pandemic.

The Ingraham Angle is traditionally a top 5 cable news show, however, it dropped to No. 18 last month in total viewers. Special Report with Bret Baier and The Story with Martha MacCallum (which recently moved from 7 p.m. to 3 p.m.) are usually top 10 shows that fell to No. 23 and No. 24, respectively. Very rare. One would assume they’ll shoot back up the ranks past CNN and MSNBC once this hot news cycle calms down.

What about ranking cable news shows by Adults 25-54, you ask? CNN leads the charge with the top four, and eight of the top 10,led by the aforementioned Cuomo, AC360, Erin Burnett Outfront and CNN Tonight with Don Lemon.

TRMS, which finished No. 1 in total viewers and skews a bit older than its CNN competition, comes in at No. 5 in the demo. Maddow is followed in the A25-54 cable news hierarchy by both hours of The Situation Room with Wolf Blitzer, The Lead with Jake Tapper, his 3 p.m. CNN Newsroom lead-in (anchored by Brooke Baldwin), with Tucker Carlson rounding out the top 10.

The remaining top 25 is below.