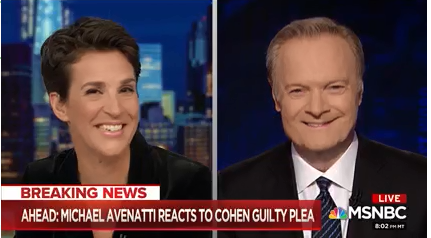 Tuesday was a wild news day, even by 2018 standards. President Trump’s former personal lawyer, Michael Cohen, pleaded guilty to multiple counts related to bank fraud, tax evasion and campaign finance violations. Cohen said he had made illegal campaign and corporate contributions “at the direction of” a 2016 presidential candidate—i.e. Trump—and with the “purpose of influencing the election.”

Not surprisingly, Tuesday proved to be a ratings bonanza for cable news. In fact, for The Rachel Maddow Show, Tuesday, Aug. 21 2018 was the 2nd-most-watched broadcast in the show’s history.

Multiple MSNBC programs set ratings records last night, and lifted MSNBC to a No. 1 finish in prime time viewing, in both total viewers and A25-54. MTP Daily, The Beat with Ari Melber, Hardball with Chris Matthews, All In with Chris Hayes, and 11th Hour with Brian Williams all had their most-watched broadcasts in series history.

The aforementioned TRMS, The Last Word with Lawrence O’Donnell (which was also the No. 2 program on cable TV last night), and Deadline: White House all had their second-most-watched nights ever. This excludes conventions, debates and election night broadcasts.

Fox News ranked No. 1 in total day yesterday, both in total viewers and among the key A25-54 demo. FNC also ranked No. 2 in total prime time viewers.

Fox News had 6 of the 10 most-watched cable TV broadcasts yesterday, including Hannity, Tucker Carlson Tonight, The Five, Special Report with Bret Baier, The Ingraham Angle, and The Story with Martha MacCallum.