NEXT:Scoreboard: Tuesday, Dec. 4
PREVIOUS:Fox News Is the 'Most Tweeted About News Outlet' of 2018 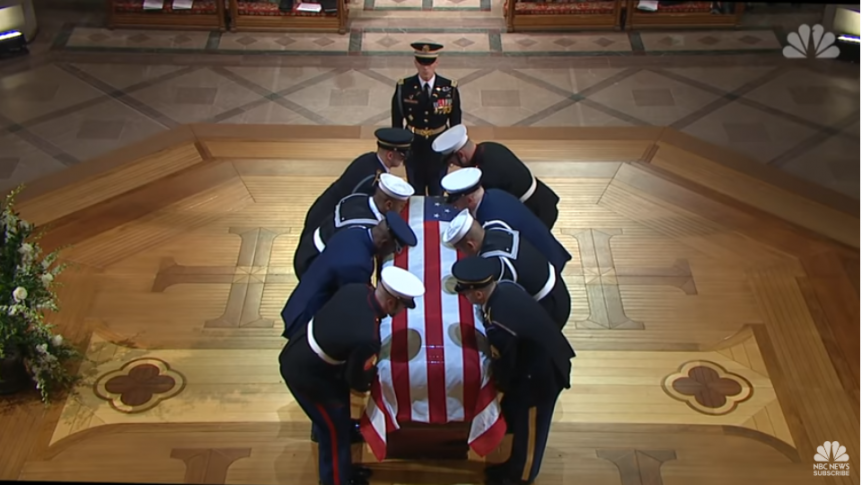 President Trump declared Wednesday a national day of mourning, as America remembered its 41st president, George H.W. Bush. The late president’s body, which has been lying in state in the U.S. Capitol since Monday, is now traveling back to Texas.

The state funeral took place this morning at the Washington National Cathedral, beginning at 11:15 a.m. ET. In addition to the Bush family and countless number of friends, those in attendance included President Trump and former Presidents Obama, Clinton and Carter together with their spouses in the same row at the front of the cathedral.

Former first lady Michelle Obama was there, a fact former President George W. Bush seemed to be acutely aware of (cue the candy):

Tributes came from George H.W. Bush biographer, historian, friend, and NBC News contributor Jon Meacham,  who told a funny story about the late president: “On the primary campaign trail in New Hampshire once, he grabbed the hand of a department store mannequin asking for votes. When he realized his mistake, he said, ‘Never know. Gotta ask.'”

He also said Bush 41 was “An imperfect man, he left us a more perfect union.”

NBC’s Willie Geist with a scoop regarding Meacham’s eulogy:

With the memorial service finished, @JMeacham has given me permission to report that he had the chance to read that beautiful eulogy to President Bush before his death.

After hearing his own eulogy, President Bush said, characteristically: “That’s a lot about me, Jon.” #Bush41

Former Canadian prime minister Brian Mulroney, who was PM during Reagan’s second term and during Bush’s term as president, also gave a tribute to his friend. He brought up the North American Free Trade Agreement (NAFTA), which the two worked quite closely together on, and went on to say, “I believe it will be said that no occupant of the Oval Office was more courageous, more principled and more honorable than George Herbert Walker Bush.” A notable proclamation considering the living presidents, present and past who were not seated not far from where he was standing.

Former Wyoming Senator Alan Simpson, a friend of Bush’s for more than 55 years, also delivered a tribute. He remarked that Bush “often said when the really tough choices come, it’s the country, not me. It’s not about Democrats or Republicans, it’s for our country that I fought for.” On a lighter note, he remarked that Bush like to tell and hear jokes, but that his biggest flaw was that he “could never remember a punchline.” The duo also liked to sing show tunes, including from Andrew Lloyd Webber‘s Evita, Simpson said.

Rev. Russell Levenson of St. Martin’s Episcopal Church in Houston elicited some laughs when he joked that Sully, Bush 41’s service dog, “has gotten more press than the president in recent days.”

The eldest son, former President George W. Bush gave easily the most important tribute of the day. He talked about how his dad loved the outdoors, whether it be skydiving, taking his boat or for a spin, or even sitting on the back porch at their on the Atlantic Ocean in Maine contemplating the majesty of the Atlantic.

“The horizons he saw were bright and hopeful,” the 43rd president said. 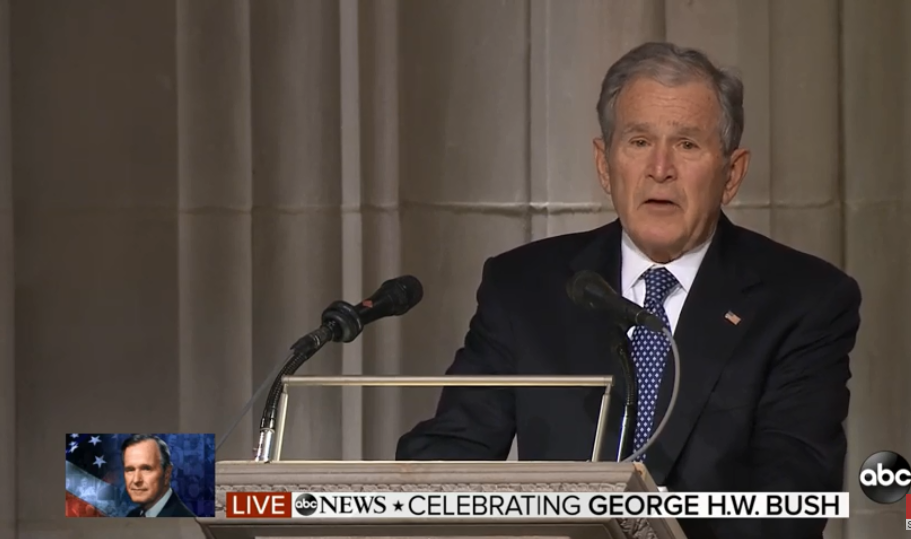 Bush also recalled how good of a friend former Secretary of State James Baker was to him.

“In his 90s, he took great delight when his closest pal, James A. Baker, smuggled a bottle of Grey Goose vodka into his hospital room. Apparently,it paired well with the steak he had delivered from Morton’s,” the 43rd president quipped.

“Last Friday when I was told he had minutes to live, I called him,” Bush said.

“I said ‘Dad, I love you and you’ve been a wonderful father.’ And the last words he would ever say on earth were, ‘I love you, too,'” he said.

CBS’ This Morning co-host Gayle King summed up the last part nicely, saying: “We can travel and go to wonderful places and meet wonderful people, but at the end of the day, all that truly, truly matters is your family — to be loved and to love them back in return.”

.@GayleKing, on former Pres. George W. Bush saying goodbye to his father: “We can travel and go to wonderful places and meet wonderful people, but at the end of the day, all that truly, truly matters is your family — to be loved and to love them back in return.” pic.twitter.com/PvM89XtAIH

CBS News political contributor Bob Schieffer recalled the friendship Bush had with Baker, saying “The reason Jim Baker wound up in Washington is George Bush got him to come to Washington to help him get over the death of his first wife. He said, ‘Come up here, I’ll put you to work.'”

.@bobschieffer on friendship between Bush and Jim Baker: “The reason Jim Baker wound up in Washington is George Bush got him to come to Washington to help him get over the death of his first wife. He said, ‘Come up here, I’ll put you to work.'” https://t.co/U9j5PUVbqs pic.twitter.com/HcatAe4aTG

NBC News’ Tom Brokaw was on hand to provide his thoughts as well, and got quite emotional while doing so:

Fox News anchor Chris Wallace spoke about the “tremendous personal burden” POTUS 43 was undoubtedly feeling. “It hits you like a ton of bricks,” the Fox News Sunday host remarked. “He’s about to do one of the toughest things he’s ever done in his life, which is to eulogize his father…no matter how important you are it’s a tremendous personal burden and you want to get it right.”

FNC anchors Bret Baier and Martha MacCallum –who led the network’s coverage of the funeral– observed the Trumps take their seats in the front row next to the Obamas, and provided their thoughts about what was a pretty surreal moment.