NEXT:C-SPAN's Steve Scully: 'I Knew Right Away When We Were Getting These Calls That We’d Tapped Into Something ...'
PREVIOUS:Scoreboard: Friday, Sept. 28 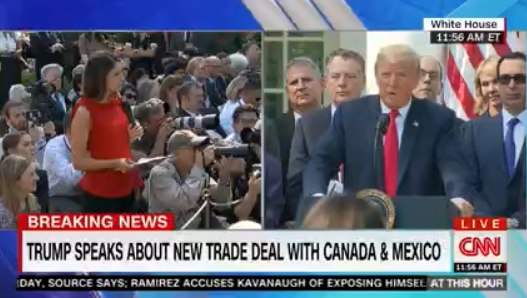 The administration held a press conference in the Rose Garden this morning, which was supposed to include an announcement of a new North American free trade agreement U.S.-Mexico-Canada Agreement (USMCA), meant to transform North America “into a manufacturing powerhouse.”

There was conversation about trade during the presser, but the president also claimed he had dirt on an unnamed Democratic senator, went after the media, and seemed to talk down to ABC White House correspondent Cecilia Vega, and later CNN White House correspondent Kaitlan Collins, both of whom were covering the event for their respective networks.

Trump called on Vega, who had her hand up to ask a question about Kavanaugh and the FBI investigation. After she turned around to get a microphone, the president said:

TRUMP: She’s shocked that I picked on her. She’s, like, in a state of shock.

TRUMP: That’s OK, I know you’re not thinking. You never do.

Pres. Trump may have meant the remark in jest, or perhaps he misspoke, but Vega definitely didn’t appreciate it.

VEGA: In a tweet this weekend, Mr. President, you said it was incorrect to say that you are limiting the scope of the FBI investigation.

VEGA: It has to do with the other headlines…

TRUMP: I know but how about getting to trade…does anyone have a trade question?

VEGA:  Do you think your trade deal will pass through congress?

TRUMP: I think so. We have other alternatives. If they’re fair, which is a big question. If it’s fair on both sides. The Republicans love it, the industry loves it. Our country loves it. If it’s fair, it will pass. I think it will pass easily because it’s a great deal. NAFTA passed, one of the worst deals I’ve ever seen.  Any other questions on trade?

VEGA: I would like to go forward with my Kavanaugh question.

TRUMP: Let’s do that later. I’ll call on you a second time.

A news conference means you get to ask whatever question you want to ask. #FirstAmendment

Later in the press conference, Trump told Collins “you’ve had enough,” after she tried to ask a follow up. This is the same Kaitlan Collins the press office banned from covering an event earlier this year.

Additionally, last Wednesday, the president also told CBS News White correspondent Weija Jiang to sit down as she tried to get in a question during Trump’s 80-minute presser.

.@weijia pressed on after Pres. Trump told her to “sit down” as she continued asking a follow-up question Wednesday, asking the president how being accused of sexual misconduct by more than a dozen women impacted his opinion on Kavanaugh claims https://t.co/kjVls2Ckzm pic.twitter.com/x5hCyIEeFr

And in announcing her pregnancy yesterday evening (congrats!), Jiang took a jab at the POTUS for the remark:

Personal news: She made a very public debut during this presser, so it’s a good time to share my husband and I are thrilled to meet our baby girl in January! Can’t wait to teach her when a man orders you to “sit down” because he doesn’t like what you’re saying, do anything but 🙂 pic.twitter.com/dZ7QiUYhlt