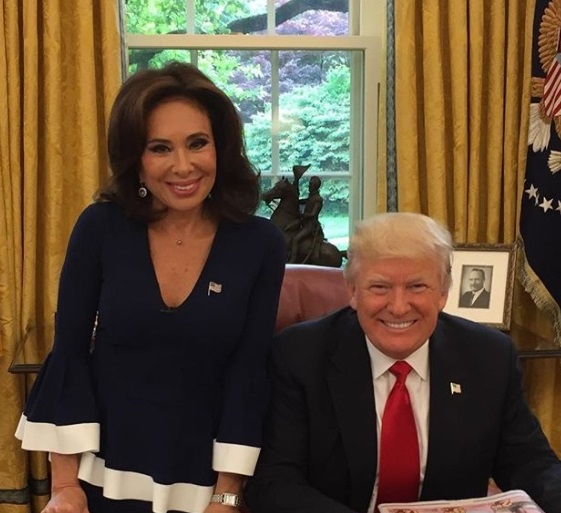 President Trump is not happy that Fox News didn’t air Jeanine Pirro’s show last night, a week after she ignited controversy—and sent several advertisers fleeing—by claiming that Minnesota freshman congresswoman Ilhan Omar is “sharia compliant” and not loyal to the U.S. Constitution because she wears a hijab.

Last night, Fox News said it would not air Justice With Judge Jeanine in its usual Saturday night time slot, and broadcast an encore airing of Scandalous instead.

That decision didn’t sit well with Trump, who tweeted Sunday morning that Fox News should “bring back” Pirro, adding, “Stop working soooo hard on being politically correct, which will only bring you down, and continue to fight for our Country.”

Also in his three Sunday morning tweets directed at Fox News, Trump told the network, “Stay true…to the people that got you there. Keep fighting for Tucker [Carlson], and fight hard for @JudgeJeanine. Your competitors are jealous – they all want what you’ve got – NUMBER ONE.”

Bring back @JudgeJeanine Pirro. The Radical Left Democrats, working closely with their beloved partner, the Fake News Media, is using every trick in the book to SILENCE a majority of our Country. They have all out campaigns against @FoxNews hosts who are doing too well. Fox …..

….must stay strong and fight back with vigor. Stop working soooo hard on being politically correct, which will only bring you down, and continue to fight for our Country. The losers all want what you have, don’t give it to them. Be strong & prosper, be weak & die! Stay true….

….to the people that got you there. Keep fighting for Tucker, and fight hard for @JudgeJeanine. Your competitors are jealous – they all want what you’ve got – NUMBER ONE. Don’t hand it to them on a silver platter. They can’t beat you, you can only beat yourselves!

A Fox News spokesperson, who said last night, “we’re not commenting on internal scheduling matters,” did not immediately to a request for comment about Trump’s tweets. UPDATE: The network said late Sunday morning that it had no comment beyond last night’s statement.

The network had released a statement last Sunday, saying “we strongly condemn Jeanine Pirro’s comments about Rep. Ilhan Omar,” adding,“they do not reflect those of the network and we have addressed the matter with her directly.”

That statement was paired with one from Pirro herself, who unlike her employer, didn’t seem to acknowledge that she had crossed a line: “My intention was to ask a question and start a debate, but of course because one is Muslim does not mean you don’t support the Constitution.”

Then, in the days that followed,  at least three advertisers—NerdWallet, Novo Nordish and Letgo—said they would be removing ads from Pirro’s show.

It not surprising that Trump would stand by Pirro, his longtime friend and ally. Last November, Pirro appeared onstage with Trump at a Missouri rally, as did fellow Fox News host Sean Hannity.

In his Sunday morning tweets, Trump also referenced Carlson, the other Fox News host who has weathered controversy this week after controversial remarks concerning women he made nearly a decade ago were discovered by liberal advocacy group Media Matters.

Carlson has remained on the air all week, and noted on-air Monday night that his network continued to support him. “Fox News is behind us, as they have been since the very first day. Toughness is a rare quality in a TV network, and we are grateful for that,” Carlson said on-air. “Second, we’ve always apologized when we’re wrong, and will continue to do that. That’s what decent people do. They apologize. But we will never bow to the mob. Ever. No matter what.”