NEXT:Chris Cuomo Gets Emotional During His Final Appearance on New Day
PREVIOUS:Betty Liu Is Leaving Bloomberg 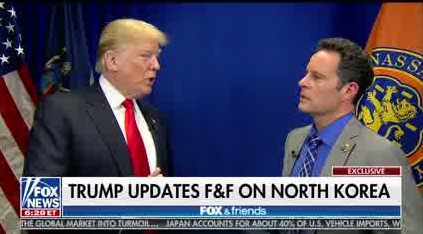 President Trump wrote a letter to North Korean leader Kim Jong Un this morning to say that their June 12 meeting in Singapore is being canceled. Trump cited what he called “tremendous anger and open hostility” from the North Korean side as the reason why the White House is canceling the summit.

This apparently didn’t go over very well with the North Koreans. This morning, Choe Son Hui, a vice minister in the North Korean Foreign Ministry, referred to vp Mike Pence as a “political dummy,” and suggested that North Korea may reconsider the planned June 12 meeting with President Trump—even threatening a nuclear showdown.

“As a person involved in the U.S. affairs, I cannot suppress my surprise at such ignorant and stupid remarks gushing out from the mouth of the U.S. vice president,” she told North Korea’s state-run news outlet KCNA.

So the White House decided to cancel.

The announcement also comes hours after Trump’s interview with Brian Kilmeade aired on Fox & Friends. Their conversation, which was taped yesterday on Long Island, covered a variety of topics, including immigration, the NFL’s decision to ban anti-police brutality on-field protests during the national anthem, and, yes, North Korea.

In fact, Trump told Kilmeade yesterday “there’s a good chance” that he would travel to Singapore next month to meet with the North Koreans.

Kilmeade: On June 12 are you going to be in Singapore?

Kilmeade: Right. And you’re OK with the phase in of a denuclearization if the confidence measures are required.

Trump: We’re going to see. I’d like to have it done immediately. But you know physically, a phase-in may be a little bit necessary, we will have to do a rapid phase in, but I’d like to see it done at one time.

CNN is the only U.S. cable news outlet with a reporter in North Korea at the moment, Will Ripley. He joined Poppy Harlow via phone during the 10 a.m. ET hour.

“Being inside this country just hours after they blew up their nuclear site… it was a very awkward and uncomfortable moment”: CNN’s Will Ripley was in a room with North Korean officials when news came that Pres. Trump canceled a meeting with Kim Jong Un https://t.co/si9DqEIse1 pic.twitter.com/SDJQ1hnRN0

CBS News is the only U.S. broadcast news outlet with a reporter in North Korea, Ben Tracy. He joined the CBS This Morning trio of Gayle King, Norah O’Donnell and John Dickerson via phone at 9:55 a.m. ET. 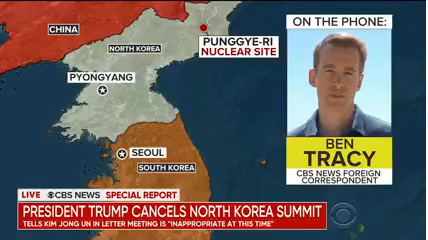