NEXT:Gayle King Reacts to Video of White Woman Calling Cops on Black Man in Central Park: 'I Am Speechless About What We're Seeing on Television This Morning'
PREVIOUS:Legendary CBS News Executive Bill Small Dies at Age 93 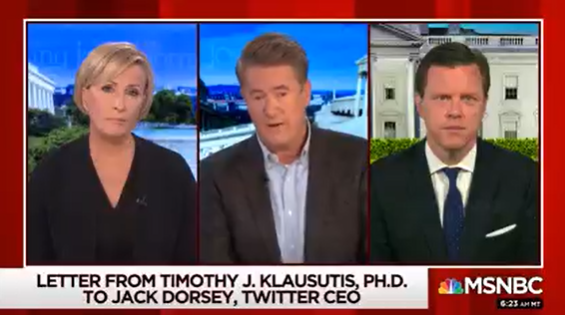 Morning Joe directly addressed the “cold case” murder conspiracy put forth by the president in recent weeks surrounding the death of a former congressional staffer when the morning show host served as a Republican congressman for the Pensacola/Fort Walton Beach, Fla., area nearly 20 years ago.

The woman’s name is Lori Klausutis and Trump continues to exploit her tragic death as a way of demeaning Scarborough and his show for their consistent criticism of the president and his administration during his first term.

Medical examiners previously determined that Klausutis died suddenly after hitting her head on a desk after losing consciousness from an abnormal heart rhythm. There were no signs of foul play, and her death has been ruled an accident.

Scarborough and his colleagues responded to Trump’s tweets by reading from a New York Times op-ed by Kara Swisher titled, “Twitter Must Cleanse This Trump Stain.”

In it, Dr. Klausutis says that Trump has “perverted” his wife’s memory, and asks Dorsey to remove the president’s tweets.

“The President of the United States has taken something that does not belong him—the memory of my dead wife and perverted it for perceived political gain. My wife deserves better,” Dr. Klausutis writes.

Dr. Klausutis also argues that an ordinary Twitter user “would be banished from the platform” if they broke the site’s rules the way Trump does, “but I am only asking that these tweets be removed.”

So, did Twitter “cleanse this Trump stain,” as Swisher phrases it? Not exactly. At least not yet. In response to Swisher’s NYT op-ed, the social media company released the following statement this morning:

Twitter statement re: Trump’s tweets about Lori Klausutis: “We are deeply sorry about the pain these statements … are causing the family.” Changes are in the works to “expand existing product features and policies so we can more effectively address things like this going forward.” pic.twitter.com/JxiYmaYYL4

Dr. Klausutis will not have his request granted yet.

After the segment aired, Trump returned to advancing the conspiracy theory, despite the wishes of Dr. Klausutis that he not do so.

The opening of a Cold Case against Psycho Joe Scarborough was not a Donald Trump original thought, this has been going on for years, long before I joined the chorus. In 2016 when Joe & his wacky future ex-wife, Mika, would endlessly interview me, I would always be thinking …

… about whether or not Joe could have done such a horrible thing? Maybe or maybe not, but I find Joe to be a total Nut Job, and I knew him well, far better than most. So many unanswered & obvious questions, but I won’t bring them up now! Law enforcement eventually will?