NEXT:Megyn Kelly Gets On-Camera Interview With Woman Who Accused Joe Biden of Sexually Assaulting Her in 1993
PREVIOUS:Wednesday, May 6 Scoreboard: Fox News Won Total Viewers and Adults 25-54 Each Hour From 4-11 p.m. 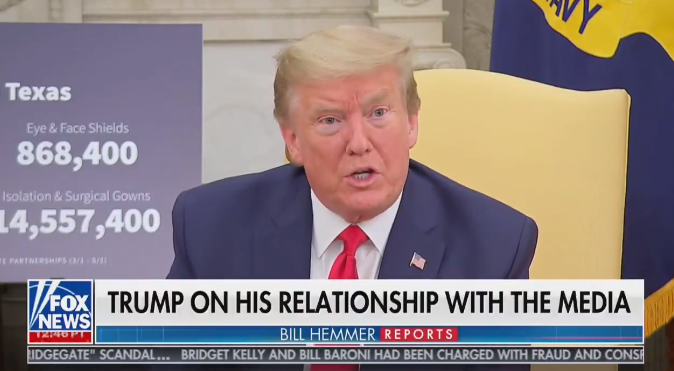 President Trump took a couple minutes during a press spray to weigh in on the state of the television news industry.

“How much influence does Fox News have over your thinking on the pandemic?” an off-camera reporter asked Trump.

“No different than anybody else,” he responded.

The president then said he is very knowledgeable and “well versed in, not only the pandemic, but in everything” because he reads the newspaper and watches several networks, despite some being “fake news.”

He then proceeded to give his thoughts on each network. He again referred to MSNBC as “MSDNC” (a reference to the Democratic National Committee), described CNN as “fake news” and called Comcast, the owner of NBCUniversal (his former employer), “Concast.”

He then criticized former NBC News and MSNBC chairman Andy Lack, who is departing NBCUniversal as part of the company reorganization.

“Andy Lack was a hack,” Trump remarked. “And they fired him, and they did a big favor to the world and to this country.”

The president went on to praise ABC News. He said he believes the network acts professionally. He applauded World News Tonight anchor David Muir, saying he was “very fair” during their interview in Arizona on Tuesday, one which has received a mix of positive and negative reviews from media critics.

Trump added that he and Muir have a good relationship.

The president then said that CBS News is “having a hard time,” citing the Project Veritas claim that CBS This Morning “staged” a fake line of cars at a Michigan health center’s drive-through Covid-19 testing site in order to “obtain newsworthy footage.”

CBS News already issued a statement in response to the Project Veritas video, saying that it did not “stage” anything at the Cherry Health facility. “Any suggestion to the contrary is 100% false. These allegations are alarming,” the network added.

Asked how much Fox News impacts his coronavirus thinking, Trump says “no different than anybody else,” saying he gets information from other news sources. He then spends the next few minutes calling the other networks “fake news”—except for David Muir, who he says was “very fair” pic.twitter.com/G2L0ShYdBh