NEXT:Scoreboard: Thursday, May 30
PREVIOUS:Suzanne Scott and the EP's of GMA, Today and CBS This Morning Are Among Adweek's 2019 Women Trailblazers 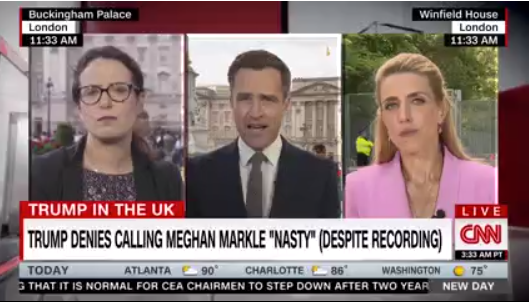 Minutes before arriving in London this morning for his three-day diplomatic visit to the U.K., President Trump proceeded to go into attack dog mode on Twitter. He sent out consecutive tweets concerning his arch nemesis CNN, expressing his displeasure about how the AT&T-owned network is the only American news source available where he is.

He calls out AT&T, telling the company to “do something” about CNN.

Just arrived in the United Kingdom. The only problem is that @CNN is the primary source of news available from the U.S. After watching it for a short while, I turned it off. All negative & so much Fake News, very bad for U.S. Big ratings drop. Why doesn’t owner @ATT do something?

Minutes later, he calls on Americans to stop subscribing to AT&T, and if they were to do so, the company “would be forced to make big changes” at the news network.

I believe that if people stoped using or subscribing to @ATT, they would be forced to make big changes at @CNN, which is dying in the ratings anyway. It is so unfair with such bad, Fake News! Why wouldn’t they act. When the World watches @CNN, it gets a false picture of USA. Sad!

The frustration likely stems from a discussion on CNN New Day about a remark he made in an interview with Rupert Murdoch’s Sun tabloid over the weekend, where he referred to Duchess of Sussex Meghan Markle as “nasty.” The president denied referring to her as “nasty” in any way, despite audio evidence to the contrary.

This is a classic of the Donald Trump genre. He’ll say something that could be interpreted in two ways. He could say she’s personally nasty or her comments were nasty. He wasn’t clear. Instead of owning it he torches anyone who notes it and says he didn’t do it in the first place. Then people talk past each other as to what he meant. He clearly said it. He was responding to something she had said two and a half years ago that he appeared surprised by. He did use the word nasty. He has a habit of saying that things didn’t happen when there isn’t audio or video. Sometimes he does it when there is.

During Trump’s interview with the British tabloid, he was told that Markle isn’t a fan of his and voted for Hillary Clinton in the 2016 election. Trump said he hadn’t been aware of this.

The president went on to say that he was glad she had joined the royal family and he believed she would make a “very good” princess.

“It is nice, and I am sure she will do excellently,” he said.

While the Royal Family has been welcoming towards the President Trump, FLOTUS, and the rest of the U.S. delegation, not everyone has been as welcoming.

The Comcast-owned Sky News mocked Trump’s arrival in the country.

Watch full coverage of President Trump’s state visit to the UK from Monday on @SkyNews. #TrumpVisit

You can find us on Sky channel 501 📺 or live here 👀 https://t.co/mFrfbZgLZW pic.twitter.com/IKuUrlFuTi

London mayor Sadiq Khan wrote an op-ed for The Guardian with the headline: “It’s un-British to roll out the red carpet for Donald Trump.”

.@SadiqKhan tells Sky News on #Ridge that the UK shouldn’t “roll out the red carpet” and give @realDonaldTrump a state visit.

When catching wind of the story, the president responded by calling the mayor “a stone cold loser.”

.@SadiqKhan, who by all accounts has done a terrible job as Mayor of London, has been foolishly “nasty” to the visiting President of the United States, by far the most important ally of the United Kingdom. He is a stone cold loser who should focus on crime in London, not me……

NEW: @SadiqKhan responds to Trump – calls the US president “far right” and says his tweets this morning are “much more serious than childish insults” pic.twitter.com/n6BqlcTl53