NEXT:Chris Cuomo Says Sean Hannity 'Is Without Question the Most Powerful Person in the Media'
PREVIOUS:20/20 EP David Sloan: 'The Network Is Looking to Us to Improve ABC Fortunes on Friday Nights, and We Are Able, Willing and Ready to Help' 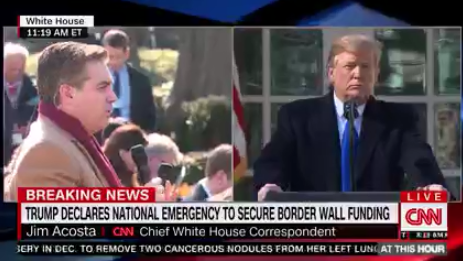 When CNN’s Jim Acosta covers a press conference featuring President Trump, you can almost be certain it will turn combative pretty quickly.

There are a number of instances where this has been the case, the most notable being when the administration took the step of suspending the chief White House correspondent’s White House press pass for 14 days last fall, before restoring it on Nov. 19, due to how Acosta comported himself at Pres. Trump’s Nov. 7 post-midterms press conference.

Acosta and Trump butted heads once again, this time today at the White House Rose Garden. The confrontation transpired when Pres. Trump was announcing that he will sign a government funding bill and also declare a national emergency along the U.S.-Mexico border.

“I wonder if you could comment on this disconnect that we seem to have in the country where you are presenting information about what is happening at the border, calling it an invasion and yet there is a lot of reporting out there, a lot of crime data out there, and there is a lot of Department of Homeland Security data that show border crossings at a near record low and shows undocumented immigrants committing crime at lower levels than native-born Americans,” Acosta explained.

“I believe in facts and statistics,” Acosta replied.

“Go ahead, let’s go,” Trump said, urging Acosta to get to his question.

Trump said to ask the Angel Moms –women whose kids were allegedly killed by undocumented immigrants– who were present in the Rose Garden for the announcement if he is making up a crisis.

“What do you think? Do you think I’m creating something?” Trump asked, as he pointed to the Angel Moms. You could hear at least one of these women say, “it’s real.”

Trump added: “Ask these incredible women, who lost their daughters and their sons. Because your question is a very political question because you have an agenda, you’re CNN; you’re fake news.”

Trump continued: “The numbers you gave are wrong. Take a look at our federal prison population. See how many of them percentage wise are illegal aliens. Just see. Go ahead and see. It’s a fake question.”