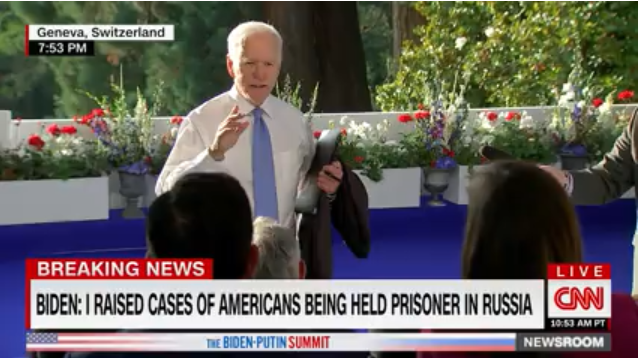 POTUS was wrapping up his press conference on his summit with Russian President Vladimir Putin, and a number of reporters shouted questions at the president as he walked away.

He stopped to answer a question concerning the Americans who were detained in Russia, and responded, “I am not gonna walk away on that.”

Kaitlan Collins then asked, “Why are you so confident he [Putin] will change his behavior, Mr. President?”

Biden responded, “I’m not confident he’ll change his behavior,” and then added, “Where the hell — what do you do all the time? When did I say I was confident?”

He then walked towards the assembled press, adding, “What I said — what will change the behavior is that the rest of the world react to them and it diminishes their standing in the world.”

Collins followed up, “But given his past behavior has not changed, and in that press conference after sitting down with you for several hours he denied any involvement in cyberattacks, he downplayed human rights abuses, he even refused to say Alexei Navalny’s name … ”

“So how does that account to a constructive meeting?” Collins asked.

“If you don’t understand that, you’re in the wrong business,” the president said before departing.

Q: “Why are you so confident he’ll change his behavior, Mr. President?”

President Biden: “I’m not confident…Where he hell–what do you do all the time? When did I say I was confident? I said…” pic.twitter.com/5kKNx7Eull

Minutes later, before heading back on Air Force One, President Biden told reporters assembled on the tarmac, “I owe my last questioner an apology. I shouldn’t have been such a wiseguy with the last answer I gave.”

He added: “Look, to be a good reporter, you’ve gotta be negative. You’ve gotta have a negative view of life, it seems to me … I apologize for having been short.”

In a post-presser hit with Wolf Blitzer, Clarissa Ward and Jim Sciutto, Collins maintained that she was just doing her job, and President Biden apologizing was “completely unnecessary,” adding, “He did not have to apologize, though I do appreciate he did.”

—@KaitlanCollins says she was just doing her job & Biden apologizing was “completely unnecessary.”

“He did not have to apologize, though I do appreciate he did.”

Collins adds that “asking the president a question does not mean it has a negative slant or a positive slant.” pic.twitter.com/PoN2uxzpxV