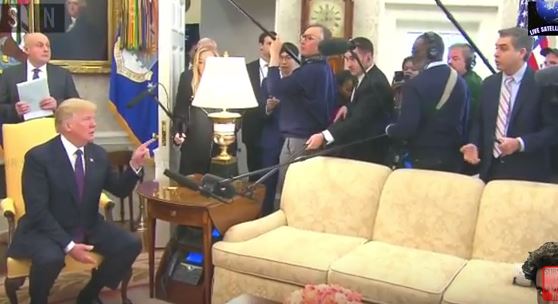 Jim Acosta was instructed to leave the Oval Office by Pres. Trump on what washis second day as CNN chief White House correspondent.

The veteran reporter along with other members of the press, were allowed inside the Oval Office during a meeting between Pres. Trump and Nursultan Nazarbayev the president of Kazakhstan.

When White House press aides started asking the press to leave, Acosta, whose contentious relationship with the Trump White House has been well-documented, tried to get in a few final questions.

“Did you say you want more people to come into the country from Norway, Mr. president?” Acosta asked.

“Thank you very much, everyone,” Trump responded.

Acosta asked the question again, to which Trump responded in a lower, softer voice, “I want people to come in from everywhere.”

“Just Caucasian or White countries, sir? Or do you want people to come in from other parts of the world…people of color?,” Acosta asked.

The president pointed at Acosta and said: “Out.”

Acosta left, and then tweeted.

As I attempted to ask questions in Roosevelt Room of Trump, WH press aides shouted in my face to drown out my questions. I have never encountered that before.

What occurred reminded me of something I would see in a different country. Certainly not at the WH. Certainly not in the U.S. https://t.co/hV6vPRe0p2

When I tried to follow up on this in the Oval Office, Trump told me to get “out.” We then went to the Roosevelt Room where WH aides obstructed us from asking questions. https://t.co/vuEIv1jvso