NEXT:GMA Unveils Its 2017 Halloween Promo
PREVIOUS:Kellyanne Conway on CNN: 'God I Hope That's a Squirrel and Not a Rat' 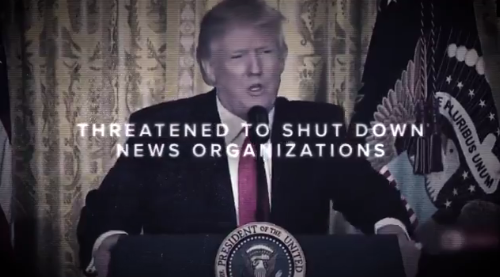 President Trump was up bright and early this morning and watching his favorite cable news show, Fox & Friends.

The program generally puts him in a positive mood. But today, not so much.

A 60-second national spot ran on Fox News at 6:14 a.m. ET paid for by billionaire philanthropist and environmental activist Tom Steyer, who is reportedly spending $10 million on an effort to have the president impeached.

The new group Steyer is backing is called “Need to Impeach,” and he’s calling on all Americans to push for Trump’s impeachment.

“He has brought us to the brink of nuclear war,” Steyer said on a voiceover. “Has been accused of obstructing justice of the FBI, and been accused of violating the constitution by taking money from foreign governments and threatening to shut down news organizations that report the truth.”

Steyer later appears on camera and refers to Trump as a “clear and president danger who is mentally unstable.” He also makes a call for all lawmakers to “take a stand on impeachment.”

The president wasn’t amused by the spot, to put it mildly, and took to his social media weapon of choice to express his displeasure: