NEXT:Sean Spicer Pressed on Recording Devices, Loyalty, and Whether the President is 'Out Of Control'
PREVIOUS:Scoreboard: Thursday, May 11 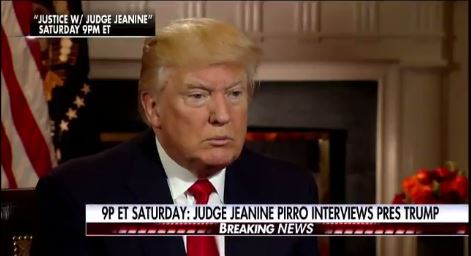 Following up on his tweet this morning that he may cancel the daily White House briefing, Pres. Trump told Fox News’s Judge Jeanine Pirro that he may just hold bi-weekly news conferences instead.

“I think it’s a good idea,” the president said of his idea.

Pirro: Are you moving so quickly that your communications department cannot keep up with you?

Pirro: So what do we do about that because –

Trump: We don’t have press conferences and we do –

Pirro: You don’t mean that.

Trump: Well, just don’t have them. Unless I have them every two weeks and I do them myself, we don’t have them. I think it’s a good idea. First of all, you have a level of hostility that’s incredible and it’s very unfair. Sarah Huckabee is a lovely, young woman. You know Sean Spicer, he is a wonderful human being, he’s a nice man.

“President Trump’s latest reaction to his perceived mistreatment by the news media poses yet another level of threat to the First Amendment,” said Dan Shelley, Incoming Executive Director of the RTDNA.

Jeff Mason, who asked the first question at today’s briefing, and who is president of the Correspondents’ Association, said, “Doing away with the briefings would reduce accountability, transparency, and the opportunity for Americans to see that, in the U.S. system, no political figure is above being questioned.”