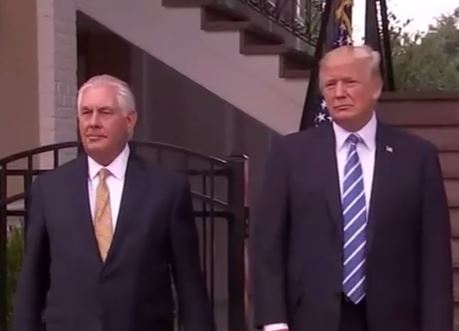 For someone who has taken relentless swipes at CNN for its coverage, Pres. Trump has a new media enemy No. 1: NBC News.

It’s all because of this NBC News story with four bylines: Carol Lee, Kristen Welker, Dafna Linzer and MSNBC anchor Stephanie Ruhle. This is the lead line: “Secretary of State Rex Tillerson was on the verge of resigning this past summer amid mounting policy disputes and clashes with the White House, according to multiple senior administration officials who were aware of the situation at the time.”

The third paragraph includes this:

Just days earlier, Tillerson had openly disparaged the president, referring to him as a “moron,” after a July 20 meeting at the Pentagon with members of Trump’s national security team and Cabinet officials, according to three officials familiar with the incident.

A couple hours after the story was published, Trump tweeted:

Wow, so many Fake News stories today. No matter what I do or say, they will not write or speak truth. The Fake News Media is out of control!

A short time ago, he got even more specific calling NBC a “disgrace” and calling on them to apologize.

NBC news is #FakeNews and more dishonest than even CNN. They are a disgrace to good reporting. No wonder their news ratings are way down!

The @NBCNews story has just been totally refuted by Sec. Tillerson and @VP Pence. It is #FakeNews. They should issue an apology to AMERICA!

Tillerson himself spoke at the State Dept. calling it “petty nonsense.”

Rex Tillerson on the report he called Trump a "moron": "I'm not going to deal with petty stuff like that" https://t.co/tTsKiNQ4WK pic.twitter.com/FutoYH7XRP