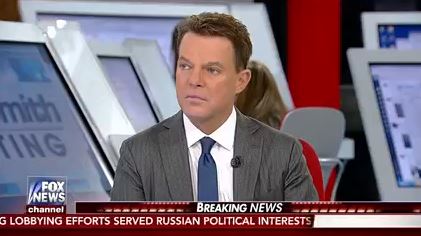 Washington Post reporter and MSNBC analyst Robert Costa got the scoop of the day, the week, let’s say since Jan. 20, about the first major piece of legislation under Pres. Trump as it came to a screeching halt.

Costa’s tweet occurred minutes before the House was expected to vote on the American Health Care Act, which would repeal and replace Obamacare.

President Trump just called me. Still on phone.
"We just pulled it," he tells me.

As TV news Capitol Hill correspondents were preparing to cover the vote, many heard that news from anchors in New York and Washington.

At 3:34 p.m. ET MSNBC’s Kate Snow said, “The control room is just giving me some information… Can I report what you just told me?,” she asked her producer, adding, “There it is in our banner. Pres. Trump telling the Washington Post the health care bill has been pulled.” 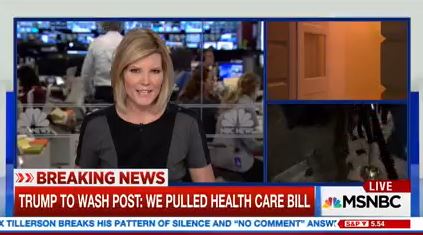 Around that same time, Fox News’s Shepard Smith was tossing to Peter Doocy on the Hill. “Sorry. I was looking down the hallway to see if there’s any members with a scoop,” Doocy told Smith.

“Excuse me, Peter. I apologize. We just got word the vote has been postponed,” Smith said.

Over on CNN, Dana Bash was giving a lay of the land on the Hill when Anderson Cooper interrupted. “CNN has learned according to a source that the President of the United States has asked the Speaker to pull the bill.”

The broadcast networks also covered the no-go vote. At 3:39 p.m. George Stephanopoulos broke in to ABC programming; Smith did double duty anchoring a special report at 3:40 for FOX broadcasting. At 3:43 p.m. Lester Holt anchored an NBC News special and Scott Pelley broke in on CBS.

More: Costa writes about getting that phone call from the president:

President Trump called me on my cellphone on Friday afternoon at 3:31 p.m. At first I thought it was a reader with a complaint since it was a blocked number. Instead, it was the president calling from the Oval Office. His voice was even, his tone muted. He did not bury the lede. “Hello, Bob,” Trump began. “So, we just pulled it.”

Before I could ask a question, Trump plunged into his explanation of the politics of his decision to call off a vote on the bill he had been touting.