NEXT:As It Marks 38 Years on the Air, Nightline Gets Its First Female Announcer
PREVIOUS:Laura Ingraham Apologizes 'For Any Upset or Hurt My Tweet Caused' 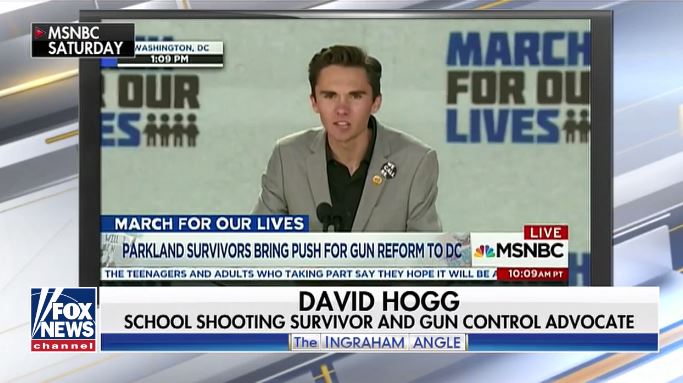 David Hogg, who survived the massacre at Marjory Stoneman Douglas High School, and who has been one of the most vocal gun control activists since, is targeting advertisers of Fox News Channel host Laura Ingraham.

Pick a number 1-12 contact the company next to that #

This may stem from comments on her show Monday night, where Ingraham included a clip of Hogg from the March for Our Lives in which he said, “to those voters that supported the NRA that allowed the continued slaughter of our children and our future, I say, get your resumes ready.”

To that, Ingraham sarcastically added, “Oooh… who wrote that line?”

Then, Wednesday morning, she tweeted a DailyWire story about how Hogg had been “rejected by four colleges to which he applied,” and then “whines” about it.

One advertiser, pet food company Nutrish, announced this morning it is pulling its ads:

Hi Seraphina. We are in the process of removing our ads from Laura Ingraham’s program.

Later Thursday, Trip Advisor and Wayfair said they were pulling their ads. “In our view, these statements focused on a high school student, cross the line of decency. As such, we have made a decision to stop advertising on that program,” a TripAdvisor spokesperson said.

As we’ve seen in the past, well-organized advertiser boycotts can be effective. Not long after 50 advertisers pulled out of The O’Reilly Factor, the long-running Fox News show was canceled.

We’ve reached out to Fox News for comment and will update when we hear back.