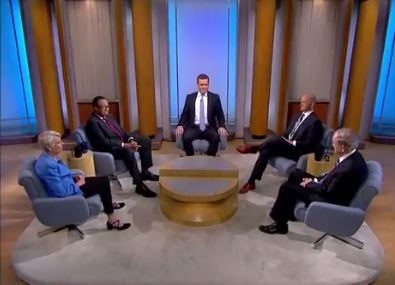 To honor him, the former panelists of his eponymous political talk show regrouped. Washington Examiner’s Tom Rogan played the role of moderator with longtime panelists Pat Buchanan, Eleanor Clift, and Clarence Page along with Evan McMullin, a former CIA officer who ran for president last year.

The show produced one episode following McLaughlin’s death, but then ceased production.

The 27-minute episode of the reconstituted McLaughlin Group was published to YouTube at Noon today. It was produced on August 11, before the events of Charlottesville, so ISSUE 1 and ISSUE 2 are Russia and North Korea, respectively. Producers call it a Pilot, which is typically reserved for the first episode of a series. But it’s not know if there will be more.

Here’s the episode in full, ad-free. Tune in to the 6-minute mark for predictions on whether Trump will be president one year from now.