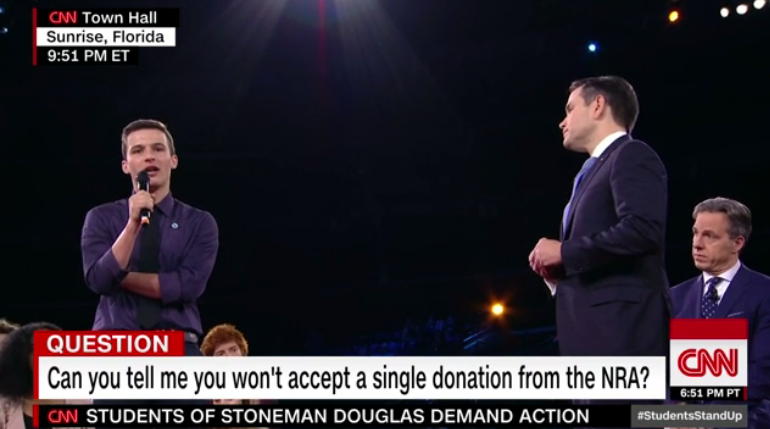 Jake Tapper moderated an intense, and oftentimes contentious 2-hour event. Those who were able to ask questions, teachers, students, and parents, were not at all afraid to express their opinions to lawmakers and especially to NRA spokeswoman Dana Loesch. For instance, one man, whose freshman daughter was killed, told Sen. Marco Rubio that his comments after the tragedy was “pathetically weak.” Later, a student named Cameron Kasky pressed Sen. Rubio, rather intensely, to commit to not taking donations from the NRA, which the senator declined to do.

WPLG-TV reporter Janine Stanwood reported from outside the arena after the event, telling viewers that a number of students she spoke with were thankful for the opportunity to let the public know what they had been through, including one who said he was happy the public was able “to see my generation’s activism.”

But one Stoneman Douglas student was not as pleased about what had transpired. Colton Haab, a Junior ROTC member who bravely shielded his classmates while the school was under attack, told ABC’s Miami affiliate that CNN shut down a question he wanted to ask about using veterans as armed security guards. He said the network crafted a “scripted” question for him, and he decided he didn’t want to ask it.

“I expected to be able to ask my questions and give my opinion on my questions,” said Haab. “CNN had originally asked me to write a speech and questions, and it ended up being all scripted.”

He continued: “I don’t think that it’s gonna get anything accomplished, and it’s not gonna ask the true questions that all the parents and teachers and students have.”

A CNN spokesman provided us with a statement in response to Haab’s remarks:

There is absolutely no truth to this. CNN did not provide or script questions for anyone in last night’s town hall, nor have we ever. After seeing an interview with Colton Haab, we invited him to participate in our town hall along with other students and administrators from Marjory Stoneman Douglas High School. Colton’s father withdrew his name from participation before the forum began, which we regretted but respected. We welcome Colton to join us on CNN today to discuss his views on school safety.

Here’s a look at some of the most contentious moments from last night’s event: