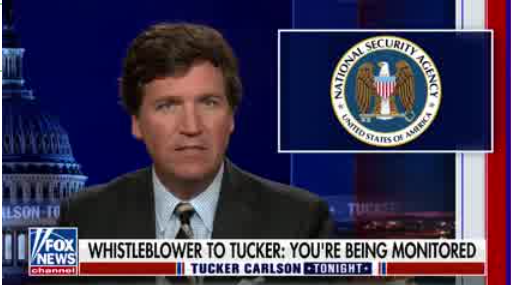 Earlier this week, Fox News’ Tucker Carlson claimed on his top-rated prime time show that he had learned through a whistleblower the National Security Agency (NSA) is spying on him and planning to leak his electronic communications in an attempt to take him off television.

“The Biden administration is spying on us,” Carlson told his viewers Monday night. “We have confirmed that.”

The NSA felt it was appropriate to set the record straight, tweeting out this statement Tuesday evening:

A statement from NSA regarding recent allegations: pic.twitter.com/vduE6l6YWg

Shortly after the NSA tweet was posted, Carlson said on his Tuesday broadcast that the agency’s statement is a “paragraph of lies.” He added that the statement “does not deny” that it read his private emails without his permission.

Carlson also insisted that the agency and the Biden administration won’t answer his question about whether they read his emails.

When reached for comment, a Fox spokesperson pointed us to the below segment from Tuesday: