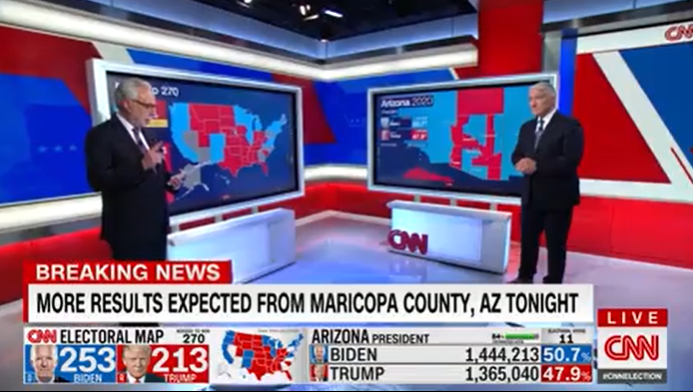 There is a lot of good ratings news to report for CNN this month. Benefiting from wall-to-wall, continuing coverage of the 2020 presidential election, and breaking news surrounding the Covid-19 pandemic, the network can officially call November 2020 its most-watched month ever, with an average of 2.8 million viewers in prime time, and 1.8 million across the 24-hour day.

Additionally, CNN beat both Fox News and MSNBC in all relevant dayparts among the demographic that matters most to advertisers of news, which is Adults 25-54.

Not only was CNN No. 1 on cable news in the A25-54 demo, but it was No. 1 across all of cable in the 24-hour-day.  The network also earned a rare win over MSNBC in total viewers, both prime time and total day, and despite averaging fewer total viewers than Fox News for the full Nielsen calendar month, since the day after the election (Nov. 4-Nov. 30), CNN has been the most watched cable news network.

Cuomo Prime Time was CNN’s top regularly scheduled show in November, and ranked No. 5 across cable news among adults 25-54.

HAS ITS MOST-WATCHED MONTH EVER

Since Election Day, CNN Is #1 in Cable News in Total Viewers and Adults 25-54;

Has Topped Fox and MSNBC in Adults 25-54 for 27 Straight Days, Longest Streak in 19 Years

November 2020 was CNN’s most-watched month ever.

In its 40 year history, the network has never had a bigger audience than it did last month, when it broke every record for viewership.

Since the day after the election (11/4-11-30), CNN has been the most watched cable news network. With Americans desperate for the facts, CNN has emerged as the #1 cable news network overall in total day among total viewers. And, among adults 25-54, CNN has been #1 for 27 straight days, the longest winning streak in 19 years, dating back to September 11, 2001.

CNN also grew triple digits vs. a year ago, far more than Fox or MSNBC.

CNN’s digital platforms are also having record numbers, making CNN the most watched and most used news and information brand in the world.

CNN programs including New Day, The Lead, The Situation Room, Erin Burnett Outfront, AC360, Cuomo Prime Time and CNN Tonight all drew higher audiences than MSNBC in the demo adults 25-54 in November.  CNN’s weekday programming at 11am, noon, 1pm, 2p, 3pm and 4pm all ranked #1 in cable news, beating both Fox and MSNBC among adults 25-54.

CNN’s updated special report Fight for the White House: Joe Biden’s Long Journey hosted by Gloria Borger on Saturday, 11/14 (10pm-12am) attracted 438k among the 25-54 demo and 1.839 million total viewers. The program ranked #1 across cable news in the demo and #2 among total viewers.

CNN continues to have the youngest audience in cable news in total day and prime. In November, CNN had its lowest median age in Total Day and M-Su Prime since September 2017. Across platforms, CNN reaches more total people in the U.S. than any other cable news brand across TV and digital.  CNN reaches the largest average monthly cumulative TV audience (among both total viewers and adults 25-54) of any cable news network 2020-to-date, making this the 19th consecutive year on record for the network.