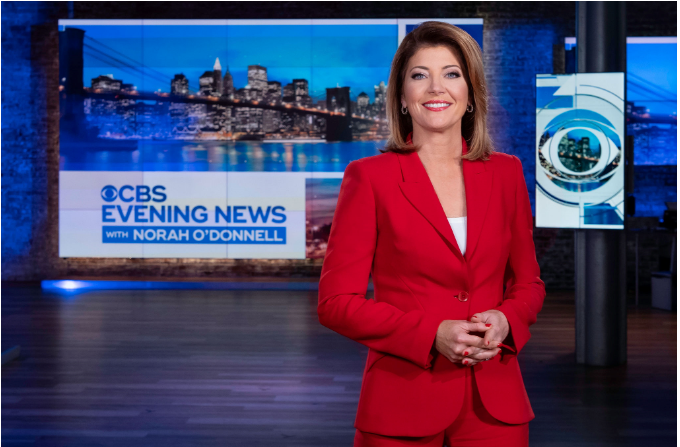 The CBS Evening News with Norah O’Donnell will launch next Monday with a journey into space.

Then on Tuesday at 10 p.m., O’Donnell will anchor Man on the Moon, a powerful one-hour prime-time special that will weave together Walter Cronkite’s coverage of the Apollo 11 moon landing with Neil Armstrong’s narrative in what’s being described as an “experiential film.”

In honor of the 50th anniversary of the Apollo 11 launch—July 16, 1969—on Tuesday at 9:32 a.m. ET, at the exact moment 50 years ago when the spaceship launched, CBSN and CBS News Radio will present Cronkite’s anchored coverage of the lift-off in real time.

That evening, O’Donnell will anchor the CBS Evening News live from the Kennedy Space Center, at the same location where Cronkite broadcast the newscast 50 years ago.

On Saturday, July 20, at 10:56 p.m. ET, CBSN and CBS News Radio will re-air CBS News’ coverage of Armstrong taking those historic first steps on the moon.

• The CBS EVENING NEWS WITH NORAH O’DONNELL will originate from the Kennedy Space Center on July 16. O’Donnell also will interview two of the people who were by Cronkite’s side for the historic Apollo coverage: former CBS News space correspondent David Schoumacher and former CBS News director Joel Banow, who created the memorable simulations and animations, which set the Network’s coverage apart. O’Donnell also will tell the story of three trailblazing women who worked on the Apollo 11 mission.

CBS THIS MORNING:
• Tony Dokoupil will co-anchor CBS THIS MORNING live from the Kennedy Space Center on July 16. He will interview International Space Station astronauts Nick Hague and Christina Koch aboard the space station. Dokoupil also will take viewers inside the Kennedy Space Center to highlight places that played an essential role on the morning of the Apollo 11 launch.

• CBS News correspondent Mark Strassmann will interview key figures from the Apollo 11 mission and explores how NASA plans to send Americans back to the moon. He will sit down with Apollo 11 astronaut Michael Collins and legendary flight director Gene Kranz in Mission Control and go inside NASA’s Lunar Sample Laboratory where most of the rocks brought back from the Apollo missions are kept.

• CBS News correspondent Vladimir Duthiers will report on the impact the Apollo 11 mission had on popular culture, then and now.

CBSN:
• In addition to the real-time coverage, CBSN will stream live from the Kennedy Space Center July 15 and 16, including coverage of the 50th anniversary ceremony. CBS News correspondent Vladimir Duthiers will lead CBSN’s coverage on July 16, joined by CBS News correspondent Mark Strassmann throughout the day. CBS News space analyst Bill Harwood also will contribute to the coverage.

• Also that morning, CBS THIS MORNING: SATURDAY co-host Jeff Glor will bring viewers on a tour of Purdue University’s archives, which contain more than 17,000 letters that Neil Armstrong received after making human history.

CBS SUNDAY MORNING:
• On July 14, Jeffrey Kluger, author of Apollo 13, talks with astronaut Michael Collins, who was the command module pilot for Apollo 11. Collins shares the perspective he had orbiting the moon while Neil Armstrong and Buzz Aldrin landed on the surface. Also, Tracy Smith looks at the history and legacy of the Apollo 11 moon landing through the “hidden figures” of the space program, the seamstresses who sewed the suits that went to the moon. Smith also talks with Harrison Schmidt, one of the four surviving astronauts to have walked on the moon. And Martha Teichner will have an appreciation of Cronkite.

FACE THE NATION:
• FACE THE NATION moderator Margaret Brennan will interview NASA administrator Jim Bridenstine about Project Artemis, America’s effort to return to the Moon in the next decade. Brennan will also talk with presidential historian Douglas Brinkley, author of American Moonshot: John F. Kennedy and the Great Space Race, on July 14.

CBS NEWS RADIO:
• CBS News Radio will present an hour-long special on July 16 revisiting the historic journey of Apollo 11 and moon landing. CBS News correspondent Peter King, anchoring from the launch pad at Kennedy Space Center, will introduce listeners to the people behind the scenes at NASA and the children of the Apollo 11 Astronauts.

CBS NEWS ELECTIONS AND SURVEY UNIT:
• CBS News’ Elections and Survey Unit will unveil CBS News polling next week that looks at how Americans view the moon landing 50 years later, how they feel about sending astronauts back there today and what they think about the contributions space exploration has made to the country.

CBS NEWSPATH:
• CBS Newspath, CBS News’ newsgathering organization providing news and information to 200+ affiliates nationwide and to broadcasters around the world, will feature extensive coverage and digital content leading up to and during the launch and landing anniversaries. CBS News correspondent Chris Martinez will report live from the Kennedy Space Center.