NEXT:Chris Wallace: 'I Think [Amb.] William Taylor Was a Very Impressive Witness and Was Very Damaging to the President'
PREVIOUS:Scoreboard: Tuesday, Nov. 12 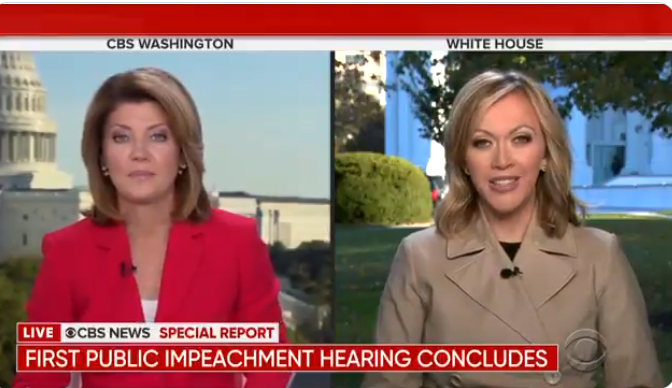 The first public hearing of the impeachment inquiry into Pres. Trump ended at about 3:30 p.m. ET, running 5 1/2 hours with only a brief break.

According to one TV newser, Democrats are claiming victory, while the Republicans are doing the same.

Host of The Daily Briefing on Fox News, Dana Perino: “Well, we’ll have to wait and see what any of those polls say but I will tell you anecdotally I had one Republican friend send me a note saying, ‘Wow, the Republicans absolutely sliced and diced the Democrats today. They are done.’ And about two seconds later, a Democratic friend sent me a note saying, ‘Wow, the Democrats totally destroyed the Republicans today, it’s over.’ So I think that opinions had already been pretty hardened and you could see what you wanted to see in today’s hearings.”

CBS Evening News anchor Norah O’Donnell remarked at 3:36 p.m. ET, just after the conclusion of the hearing: “There we have it. Some devastating testimony today from two of America’s most respected diplomats, who have served both Republican and Democratic presidents.”

She added: “Our whole team has been watching all morning and all afternoon and now we get the chance to break it all down for everyone and to highlight many of the key things that we heard today. If you were bored you weren’t paying close enough attention because there were lots of little nuggets here to follow.”

What were those nuggets?

“One of the most devastating new details we heard today, Margaret [Brennan], was from Ambassador Taylor who revealed new information that wasn’t in his previous deposition about a specific phone call where President Trump was involved, explain.”

O’Donnell went to Face the Nation moderator Margaret Brennan, who added, “This was key, it was new information, it indicates a new witness who has firsthand accounts and Ambassador Taylor said that he, when he wept back to Ukraine after his first deposition, he learned from a staffer, that this staffer on July the 26th–that date is key– the day after President Trump and President Zelensky had their phone call, the very next day this individual you see on your screen, David Holmes, who is a career foreign service officer, CBS News learned his name, he is a foreign service officer whose former boss told me is sharp, honest experienced, one of the very best foreign service officers he’s ever worked with.”

Brennan added: “Holmes told Taylor that he heard a phone call between the President of the United States and the Ambassador Gordon Sondland in a restaurant overheard him having a phone call when the phone call ended he said to the ambassador, well, what does President Trump think of Ukraine an acknowledgment that that is indeed who was on the phone…”

“It is a historic day, our Constitution is at work, and the beginning of an important new phase in the impeachment inquiry, and President Trump’s very tenure in office hangs in the balance,” said Holt.

“By having George Kent and William Taylor as the first two witnesses, they are laying out long-standing U.S. policy that is the post-Cold War policy against Russian aggression,” remarked Mitchell.

“The facts are actually no longer in dispute,” said Todd. “In fact, the new Republican defense is not to dispute the facts, it’s to start to debate motive, start to debate what was his intent, and one thing that they’re focused on is trying to say well you don’t have evidence that there was a direction, that the President directed him to do this. They’re not just laying out the case that the president did it, they’ve made that case. The president did it. Now the question is, ‘is it so egregious that he should be disqualified from holding office immediately?’ Or, it’s egregious enough that you should factor it into your decision about whether or not he deserves re-election? I think that going to be at some point probably where this debate moves.”

Todd added: “Democrats laid out this case that seemed very easy to follow. I think Ambassador Taylor was a very strong witness and sort of a narrator of the events, if you will, but I also thought the Deputy Secretary of State George Kent also came across very much a career professional, didn’t sort of back down at times.”

What do Ukranians think about all of this? It’s something that really hasn’t been analyzed much. Engel entered the conversation with some insight. They hate it.

“They are trying not to get involved, they find this whole thing very embarrassing,” said Engel. “They didn’t want to get dragged into this in the first place. Ukrainians believe they got dragged into this because they were dependent on the U.S. for military.”

“It was really a ping pong match between Republicans and Democrats,” said Baier. “Congressman Jim Jordan questioning Ambassador Taylor about how he got to, what he called a clear understanding that the aid was withheld unless there was a clear investigation of the Democrats 2016 efforts in the Bidens, saying it was second, third hand information, hitting that again and again.”

Baier added: “Then Eric Swalwell coming back saying we wouldn’t have to deal with the hearsay if we heard from people like White House chief of staff, Mick Mulvaney and former National Security Advisor, John Bolton.”