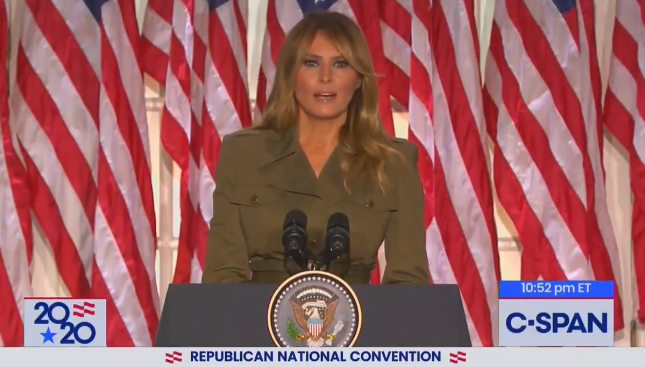 Multiple members of the Trump family—Eric, Tiffany and Melania Trump—took center stage on Night 2 of the 2020 Republican National Convention.

While they were the headliners for the evening, there was controversy swirling around the event even before things got underway.

One of the evening’s speakers, a woman named Mary Ann Mendoza, was pulled from the program just hours before airtime after it was discovered that she had tweeted an anti-Semitic conspiracy theory.

Then, there was the decision to include Secretary of State Mike Pompeo in the program, a move that had been condemned by government watchdogs, and Democrats. However, the Trump administration and Republicans defended the move before the evening, and said that Pompeo “will address the convention in his personal capacity. No State Department resources will be used.” Secretary Pompeo delivered his remarks from Jerusalem.

News broke hours before the broadcast that the RNC would air a naturalization ceremony during the program, and that President Trump had also pardoned a convicted bank robber named Jon Ponder, who has created a successful Las Vegas-based reentry program named Hope for Prisoners.

CNN’s Jake Tapper didn’t hold back with his thoughts about the state of the convention, talking at the top of the broadcast about “the erosion of norms.” He has often spoke about “lack of decency” and “busting of norms” over these past three-plus years of the Trump administration.

Wolf [Blitzer], frankly, I have never seen any president so blatantly use and some will no doubt argue misuse the power of his office, Article Two powers under the Constitution for naked political purposes. Tonight, the president will issue a pardon for a convicted bank robber. Jon Ponder is a worthy candidate for a pardon. He helps former prisoners reemerge in the world and turned his life around. He was pardoned earlier this year by the State of Nevada. But for the president to do so as part of a political convention is highly unusual, if not completely inappropriate. Same with the president’s other surprise tonight. He’s going to preside over a naturalization ceremony for new citizens. This is a president accused of demonizing immigrants, undocumented and legal, since he began his campaign. Now, to reiterate, these worthy actions are part of his presidential powers but it cheapens them to make them convention stunts. It seems to be an attempt to help wipe the slate clean after years of racially if not objectively racist acts and words. Dana [Bash], the campaign understands this is a real point of vulnerability for the president. The perception in these races and trying to fight that including with new testimonials.

Actor Jon Voight voiced another video to open the evening, similar to the one which opened last night’s broadcast … “tonight we explore America, land of opportunity.”

Pastor Norma Urrbazzo from the International Church of Las Vegas gave the opening prayer, and she was followed by Navajo Nation vice president Myron Lizer, who gave taped remarks from New Mexico. Lizer complimented the president for his support of the Native American community, including for providing, “the largest financial package to Indian country.”

Then, there was the taped segment where Trump pardoned Ponder.

President Trump pardoned Jon Ponder, a convicted felon who has since started a program to help former prisoners re-enter society.

As the actual pardon was being shown, CNN cut to Anderson Cooper with Van Jones, the latter having worked closely with the administration on criminal justice reform. Jones had a mixed reaction to the move. He was happy to see a pardon, felt the man’s story was compelling, but didn’t like the venue and the way it was done. “It seemed like a political stunt … having it at a convention cheapens it.”

CNN then went to commercial.

MSNBC aired the pardon segment, and aired Sen. Rand Paul‘s remarks, before Rachel Maddow broke in with some fact-checking of Sen. Paul. MSNBC then went to commercial.

Then,  there was the “forgotten men and women” portion of the event, which included a lobsterman from Maine, a dairy farmer from Wisconsin speaking on stage about the Trump economy, before transitioning to taped piece featuring American citizens living their lives, interspersed with clips of the president visiting various parts of the country.

President Trump chief economic adviser Larry Kudlow provided a taped message from his home in Connecticut. He also sought to tout positive aspects of the current economy, but seemed to refer to the pandemic in the past tense, even though it’s alive and well. Kudlow was followed by a second Wisconsin business owner speaking on stage, who discussed trade policy.

Next, the the theme of abortion. A granddaughter of the late Rev. Billy Graham, Cissie Graham Lynch, took the stage to speak in support of Trump and to attack transgender rights, referring to transgender girls as “boys” while discussing policies that aim to accommodate transgender people based on their gender identity. Later, a “Planned Parenthood director-turned-pro-life advocate” spoke and was rather graphic.

There seemed like more on-stage speakers during the first 45 minutes of tonight’s event than the previous evening.

At 9:20 p.m. ET, a teenager named Nick Sandmann provided a taped address for the convention. Sandmann reached a confidential settlement with CNN in January, after suing the network for $275 million and claimed it defamed him in coverage of a viral video last year. He took a number of shots at mainstream media outlets during his remarks, taped at the Lincoln Memorial, referring to media as “anti-Christian,” and saying, “‘Cancelled’ is what’s happening to people around this country who refuse to be silenced by the far left.”

He concluded by praising Trump for being willing to fight back against the media and ended his segment by putting on his MAGA hat.

Nick Sandmann shares his account of the incident on the steps of the Lincoln Memorial last year. Full #RNC coverage here: https://t.co/BKsadouBVC pic.twitter.com/ERbKchE7H3

Former Florida AG Pam Bondi, a member of the Trump’s impeachment trial legal team, a registered lobbyist for a foreign government and co-chair of Women for Trump, spoke. She went into attack mode against Joe Biden’s son Hunter Biden, speaking about nepotism … not long before Tiffany Trump and Eric Trump were was set to speak.

Speaking of female advocates for Trump, the next segment was a taped piece featuring female members of Trump’s administration, including Kellyanne Conway, Kayleigh McEnany, Stephanie Grisham, Sarah Huckabee Sanders and others talking about life in the White House, at home, and working with and for President Trump.

In her on-stage remarks, Tiffany Trump initially touted her father’s successes in office, before heading in another direction. “People must recognize that our thoughts, our opinions, and even the choice of who we are voting for may and are being manipulated and invisibly coerced by the media and tech giants,” she said. “If you tune into the media, you get one biased opinion or another,” Trump said. “And what you share, if it does not fit into the narrative that they seek to promote, then it is either ignored or deemed a lie regardless of the truth.”

Trump’s youngest daughter then called this  “manipulation” a suppression of freedoms, saying, “This misinformation system keeps people mentally enslaved to the ideas they deem correct.” She continued to blame this phenomenon for creating “unnecessary fear and divisiveness,” then claimed that the government is working with technology and the media to set up system to foster controversy and dominate the minds of Americans.

Next, a taped segment featuring Vice President Mike Pence. In it, he speaks with a cross-section of Americans who tell him stories about how government affects them. The backdrop was meant to be the Indiana boyhood home of Abraham Lincoln. The segment was actually quite well produced, although the music was a bit hokey.

After Florida’s lieutenant governor spoke out against socialism, President Trump made an appearance for the aforementioned naturalization ceremony. The ceremony began just after 10 p.m. ET, right as the broadcast networks were joining the coverage.

The ceremony, while a nice gesture, might not have been legal under these circumstances:

Folks, this is definitely a violation of the Hatch Act — mixing official duties with politics while on federal grounds.

Trump is exempt from the Hatch Act, but Wolf isn’t

Acting DHS Secretary Chad Wolf presides over a naturalization ceremony at the White House during the RNC. His appearance is an apparent violation of the Hatch Act, which prohibits federal employees from performing political activities on duty https://t.co/tz1YGPbJoz pic.twitter.com/N0oLsprTZM

“What’s really fascinating about this is presidents have always kind of played with the line,” CBS News’ John Dickerson said of the ceremony. “He’s [Trump] stepping right over it, and I think part of the hope is that the controversy created will convey a message, and that message is that he cares about immigrants, which is contrary to the message that most of the country believes.”

After the ceremony, the president’s youngest son Eric Trump spoke. Aside from delivering the expected broadsides at Joe Biden (which included a number of falsehoods) and touting his father’s successes, he said wanted to take a second to speak to his father, and tell him that he missed working with him. Neither Donald Jr. nor Tiffany were particularly sentimental about their father, making this speech differ from the rest.

“Of course, family members are always used at conventions, there’s no question about that,” said ABC News chief news anchor George Stephanopoulos. “Usually though they’re used to soften up the candidate, humanize the candidate in some way. What we’re seeing here are real political speeches.”

Trump was followed by Kentucky’s 34-year-old attorney general Daniel Cameron, the state’s first African-American AG, who attacked Joe Biden’s past remarks on race. Secretary of State Mike Pompeo followed Cameron, delivering remarks from Jerusalem about how successful the Trump foreign policy has been.

“Mike Pompeo standing on the roof of King David with the city of Jerusalem behind him is very appealing to evangelical voters, like Mike Pompeo himself, who views the modern state of Israel as the modern embodiment of biblical verse,” said Face the Nation moderator Margaret Brennan. “This is something that speaks very strongly as a political tool, even though the foreign policy accomplishments he rattled off, there haven’t been major agreements, with the exception of those involving the Netanyahu government in Israel.”

First lady Melania Trump ended the evening with live remarks from the White House Rose Garden in front of an audience of about 75 people. While she spoke at length about the Covid-19 pandemic, there did not appear to be any social distancing and very few attendees were wearing a mask.

Flotus closed the evening, and in her prepared remarks, seemed to acknowledge how difficult the Covid-19 pandemic has been for so many Americans. Previous speakers have praised the president’s response to it, without pointing out the catastrophic nature of Covid-19.

“My deepest sympathy goes out to everyone who has lost a loved one. My prayers are with those who are ill or suffering. I know many people are anxious and some feel helpless. I want you to know you are not alone,” she said.

She took a moment to thank her mother and father for everything they did for their family.

The first lady then addressed the country’s racial issues: “It is a harsh reality that we are not proud of all our history,” she said, adding, “I urge people to come together in a civil manner.” She calls for an end to looting and violence.

She then drew attention to the epidemic of suicides and drug overdoses: “In my next four years as first lady, I will continue to build upon the best and work with individual states to pass legislation to take care of our most vulnerable.”

All in all, it was a well-meaning speech that lasted around 25 minutes, wrapping up the second night of the 2020 RNC, an event that couldn’t be anymore different from the previous week’s festivities.