NEXT:How TV News Is Covering the Passing of President George Herbert Walker Bush This Weekend
PREVIOUS:Robin Meade Recalls Jumping Out of a Plane With the Late President on Live Television 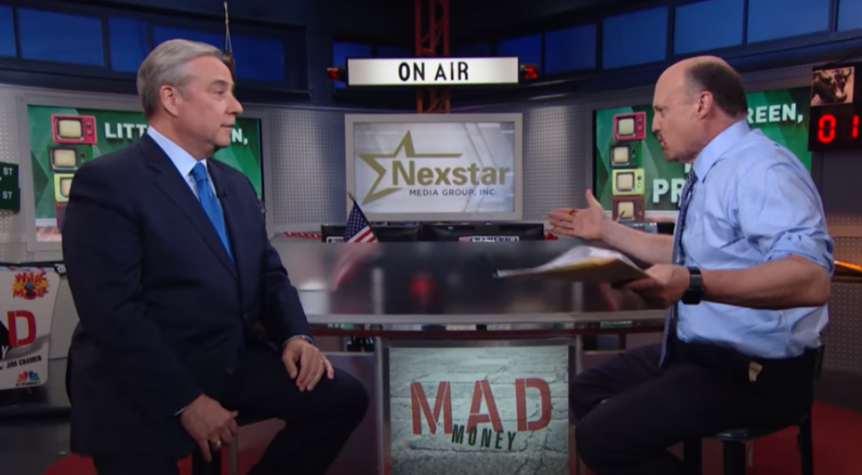 Tribune Media has made a deal that it prays will get approval. But it’s not with the company you long expected.

Nexstar Media Group announced that it will acquire Tribune Media Company for $6.4 billion, including debt. The deal will make Nexstar the largest owner of local TV stations in the U.S. with coverage of about 39 percent of TV homes.

“Nexstar has long viewed the acquisition of Tribune Media as a strategically, financially and operationally compelling opportunity that brings immediate value to shareholders of both companies. We have thoughtfully structured the transaction in a manner that positions the combined entity to better compete in today’s rapidly transforming industry landscape and better serve the local communities, consumers and businesses where we operate.  As with our past transactions, we have developed a comprehensive regulatory compliance plan and believe we have a clear path to closing.  With committed financing and a plan for significant synergy realization that will result in only a minimal increase in Nexstar’s pro-forma leverage, the combined entity will be poised for growth, leverage reduction and increased capital returns for shareholders.”

Nexstar, headquartered in the Dallas area, will expand to 216 stations in 118 markets including Tribune stations in the nation’s four largest markets:  New York, Los Angeles, Chicago and Philadelphia, 18 of the nation’s top 25 markets, 37 of the top 50, as well as cable network WGN America, and a 31 percent ownership stake in the Food Network.

“The transaction offers synergies related to the enhanced scale of the combined broadcast and digital media operations, and increases our audience reach by approximately 50 percent,” Sook added.

“We are delighted to have reached this agreement with Nexstar as it provides Tribune shareholders with substantial value and a well-defined path to closing.  Together with Nexstar we can better compete by delivering a nationally integrated, comprehensive and competitive offering across all our markets.   We believe this combination will produce an even stronger broadcast and digital platform that builds on the accomplishments of both companies and benefits our viewers and advertisers.  The premium value our shareholders are receiving reflects the hard work of our dedicated Tribune employees in maximizing the value of our portfolio.  I look forward to working closely with the Nexstar team to deliver on the value of this compelling combination and to ensure a smooth transition and integration of our companies.”

Nexstar, which launched in 1996, owns or operates 171 television stations across the U.S., most of which are broadcast affiliates in small to medium-sized DMAs. Nexstar stations range from KSEE-TV, the NBC station in Fresno, to WMBB-TV, the ABC station in Panama City and seemingly everywhere in between.

It had been assumed for over a year (and up until August) that Maryland-based Sinclair Broadcast Group would acquire Tribune.

The Sinclair-Tribune deal had been struck in May 2017 and would have given Sinclair—already the largest owner of local stations in the country—ownership of 233 local TV stations across the nation, including 42 Tribune stations, and access to more than 70 percent of U.S. TV-owning households.

Yet, the deal was terminated by the Chicago-based company in August amid concerns from the Federal Communications, led by FCC commissioner (and Trump appointee) Ajit Pai, who said the conservative-skewing media company breached its contract by misleading regulators during the transaction’s approval process.

As was true with Sinclair, Nexstar is expected to have to divest some stations to satisfy regulators. But based on early indications, this acquisition should g more smoothly than the Sinclair-Tribune fiasco.

Assuming it would eventually acquire Tribune, Sinclair was rumored to use the increased footprint to launch a national news network. Other reports were that Sinclair would launch original news programming in prime time to go up against conservative opinion programming of Fox News.

We’re not yet aware as to whether or not Sook and Nexstar have similar ambitions.