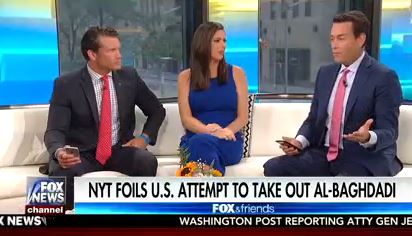 The New York Times is angry at Fox News Channel’s Fox & Friends, and they’re asking the program’s executive producer for an “on-air apology and tweet” over a segment that aired Saturday morning concerning a 2015 Times story about U.S. efforts to capture ISIS leader Abu Bakr al-Baghdadi.

Why a segment based on a report from two years ago? Fox News chief intelligence correspondent Catherine Herridge brought it up during an interview with Gen. Tony Thomas during the Aspen Security Forum last week. Gen. Thomas, head of Special Operations Command, said that the leaked and later published info “by a prominent national newspaper” caused a lead to the ISIS leader’s whereabouts “to go dead.”

Fox & Friends Weekend co-host Clayton Morris claimed, the ISIS leader “was able to basically sneak away in the cover of darkness after a New York Times story went to press in 2015.”

Co-host Pete Hegseth said, “We would have had al-Baghdadi based on the intelligence we had, except someone leaked information to the failing New York Times in 2015 — this is the previous administration, and as a result he slipped away.”

Hegseth continued: “When that goes on the Internet, as the failing New York Times does, that can be read there and elsewhere, so he understands what they know, goes underground, goes somewhere else, changes his plans. That’s one of the other reasons it’s the failing New York Times. It’s not just failing in its credibility…It’s failing our country.”

But it turns out the Pentagon announced the raid right after it occurred, which was reported by a variety of outlets, including Fox News. A Times article a few weeks later added more details, which the Pentagon reportedly was OK with.

On Sunday, the Times sent a letter both to the Fox & Friends Weekend ep and to Herridge seeking an “on-air apology and tweet from Fox & Friends.”

“I am writing on behalf of The New York Times to request an on-air apology and tweet from Fox & Friends in regards to a malicious and inaccurate segment ‘NY Times leak allowed ISIS leader to slip away,’” wrote Danielle Rhoades Ha, vp of comms for the Times.

Then came this statement from Fox News: “The FoxNews.com story was already updated online and Fox & Friends will also provide an updated story to viewers tomorrow morning based on the FoxNews.com report. For all of their concern about accuracy, the New York Times didn’t reach out to anyone at Fox News until Sunday afternoon for a story that ran Friday night.”

Apparently a Fox News executive told Politico’s Hadas Gold: “If we notified the press every time the N.Y. Times had to update an online story or correct something, your inbox would crash.”

Rhoades Ha said she has yet to receive a response from the Fox & Friends weekend ep, saying: “We asked them for an apology because the entire premise of their segment is false…I find it curious they are focusing on the timing of my emails instead of whether or not their reporting is false.”

FNC ultimately updated their story with the Times’ letter and said they would “provide an updated story to viewers” on Monday’s show.

The program briefly addressed the report this morning the 6 a.m. hour as Fox & Friends co-host Steve Doocy read the following:

“And now an update to a story we reported over the weekend. General Tony Thomas, who leads the special operations command telling our own Catherine Herridge last week that the U.S. military was close to tracking down ISIS leader al Baghdadi after a 2015 raid that tons of intel. He ended up getting away.”

After the general’s remarks were played, Doocy said the following:

“On Sunday, the [New York] Times sent Fox News a lengthy statement saying The Times described its 2015 reporting to the Pentagon before publication, and they had no objections and no senior American officials have ever complained publicly until now. If you want to read the entire statement, it is posted on FoxNews.com.”

So, no on-air apology, or tweet, as the Times requested.

Update: Late Monday, Fox News sent this statement: “Neither FOX News’ report nor the subsequent on-air coverage was inaccurate. We find it beyond disappointing that the New York Times, in an attempt to distract from their recent debacle, decided to blame FOX News for comments made publicly by General Thomas during a widely viewed panel at the Aspen Security Forum. It might behoove the Times to actually check in with their reporter Eric Schmitt to see whether Gen. Thomas’ comments have merit and whether Schmitt’s reporting in 2015 revealed intelligence that allowed ISIS leader Abu Bakr al-Baghdadi to slip away.”