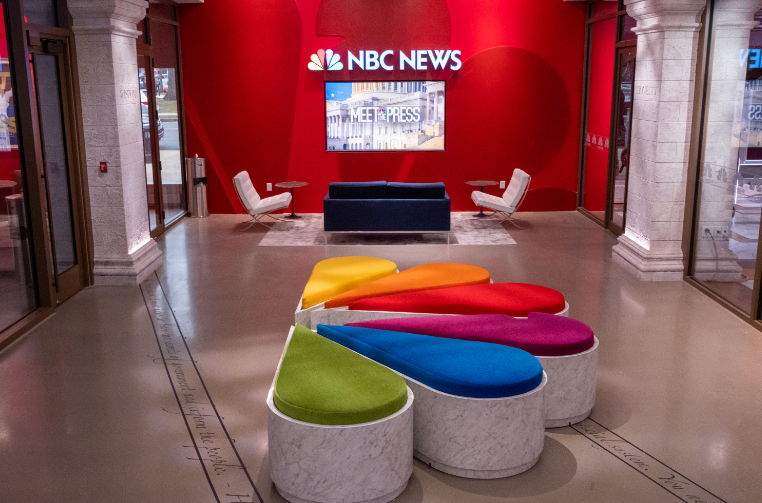 A new year means a new bureau for NBC News.

The NBCU News Group debuted its new state-of-the-art studios and Washington bureau Sunday with Meet the Press live from the network’s new D.C. headquarters in a different part of the District.

The new D.C. bureau spans six floors and 80,000 square feet with seven studios, and will be the home of programming across NBC News, MSNBC, and CNBC, in addition to NBC News Channel, Telemundo and Sky News’ Washington operations. WRC-TV NBC4, however, will continue to broadcast from the old bureau on Nebraska Ave.

“This is an outstanding new home for our Washington-based journalism and broadcasting,” NBCU News Group chairman Cesar Conde told TVNewser. “Bringing together our teams across NBC News, MSNBC, CNBC and Noticias Telemundo best positions us to cover every storyline coming out of D.C.”

The design inspired by the neoclassical and federal-style architecture found throughout D.C., and boasts 14-foot high ceilings with a coffered ceiling like Union Station’s Main Hall. 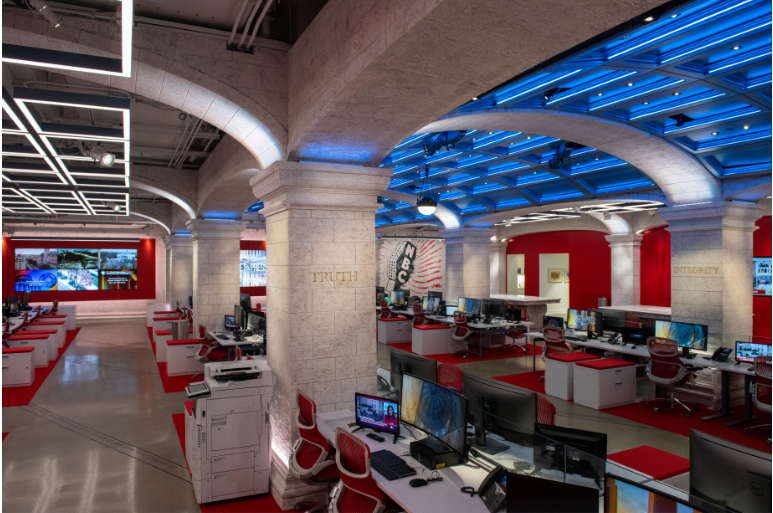 The new studios will feature modern lighting, contemporary stone finishes and state-of-the-art technology — including 650 square feet of tracking LED walls. There will be ten-foot, floor-to-ceiling windows circle the main first floor studio, similar to Studio 1A at NBC News HQ at 30 Rock in New York, as well as exterior-facing LED screens showcasing live programming and running news-tickers flanking the façade of the building.

“We wanted to create a space, just steps away from Capitol Hill, that speaks to NBCU News Group’s commitment to Washington-based coverage,” NBC News and MSNBC svp of design and production Marc Greenstein told TVNewser. “It was important to us to balance the federal-style architecture with the unique modern finishes and latest technologies to break from the generic feel of many modern workspaces. Plus, creating expansive windows across the first floor studios and newsroom also reflects the importance of journalistic transparency.”

Nine programs across NBC News and MSNBC will begin broadcasting from the new bureau in 2021 including: NBC’s weekend morning duo of Meet the Press with Chuck Todd, and Weekend Today with Peter Alexander and Kristen Welker, to go with 7 MSNBC shows: The ReidOut with Joy Reid, Way Too Early with Kasie Hunt, MSNBC Live with Hallie Jackson, Andrea Mitchell Reports, MTP Daily, The Sunday Show with Jonathan Capehart, and The Cross Connection with Tiffany Cross. 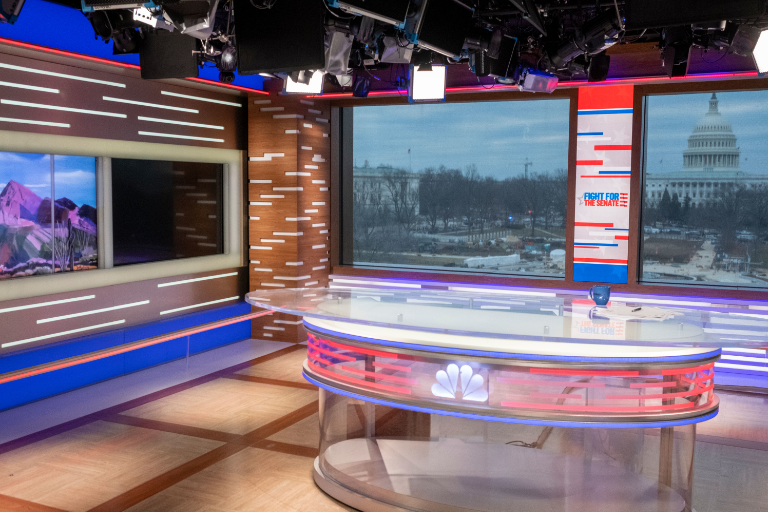 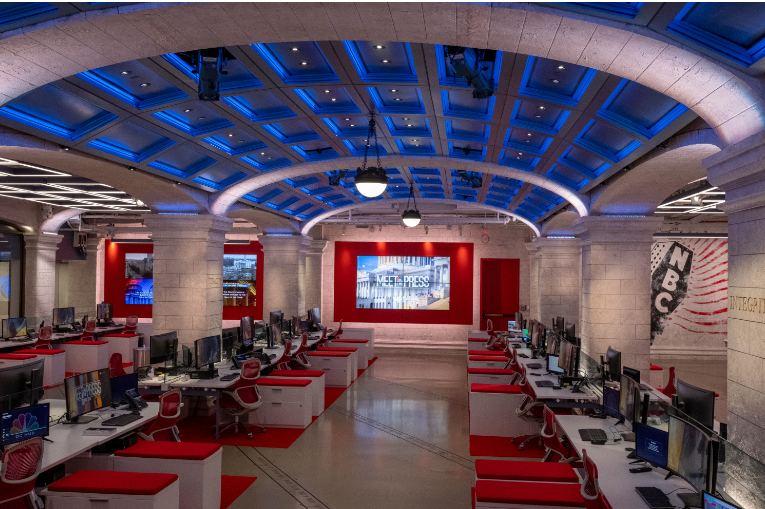 “Coverage of a new administration, a new Congress and an ever-changing electorate continues to drive the Washington news cycle with no sign of letting up; NBC News is best positioned, both in terms of coverage capabilities and now geographically, to cover it all,” NBC News vp and Washington bureau chief Ken Strickland told TVNewser. “If you were to build a Washington, D.C. network news operation from scratch, this is the place you would build it. We’re close to news events and steps away from Washington decision makers, benefitting not only our reporting but making it easier for the newsmakers to, one day, appear back in studio.”

NBCU News Group’s move to 400 N. Capitol follows more than 60 years of NBC News broadcasting from the historic 4001 Nebraska Ave. location in the northwest corner of the nation’s capital.

President Eisenhower joined NBC president Robert Sarnoff in 1958 for the formal dedication of the network’s Washington operations. Former studios were home to the second Nixon-Kennedy debate, the first television address of The Muppets, and the first television broadcast of Meet the Press.

“For more than seventy years, Meet the Press has been the place where presidents, policy makers, foreign leaders, and those in power have come to speak directly to American viewers,” Todd told TVNewser. “From every U.S. president since John F. Kennedy to international leaders like Fidel Castro and Benjamin Netanyahu to Sen. John McCain and President-elect Joe Biden’s more than 50 appearances each, these historic moments and interviews have all happened on Meet the Press. This year, we will continue to be the gold standard of Sunday public affairs programming with the same sensibilities and mission, only now from a 21st century studio with the latest technologies and broadcast capabilities.” 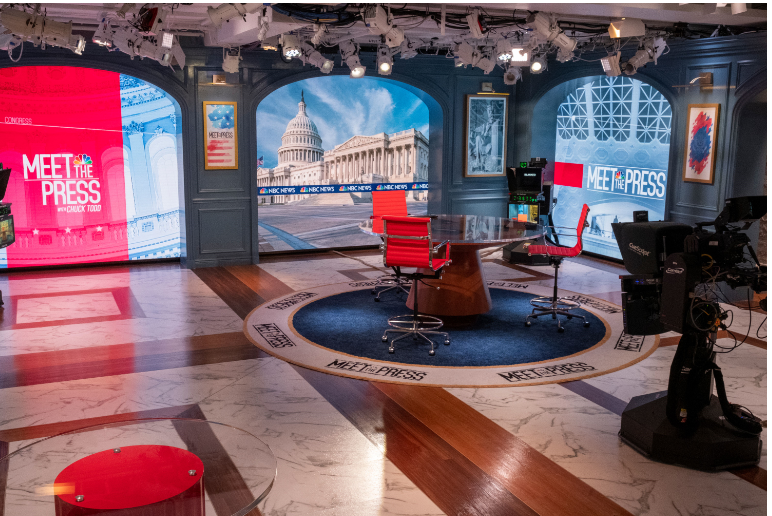 Conde added: “I’m looking forward to the day when we can all safely collaborate and work together in person in these new spaces. Until then, we will continue to adapt and innovate, producing stellar reporting and programming with the majority of our workforce operating remotely.” 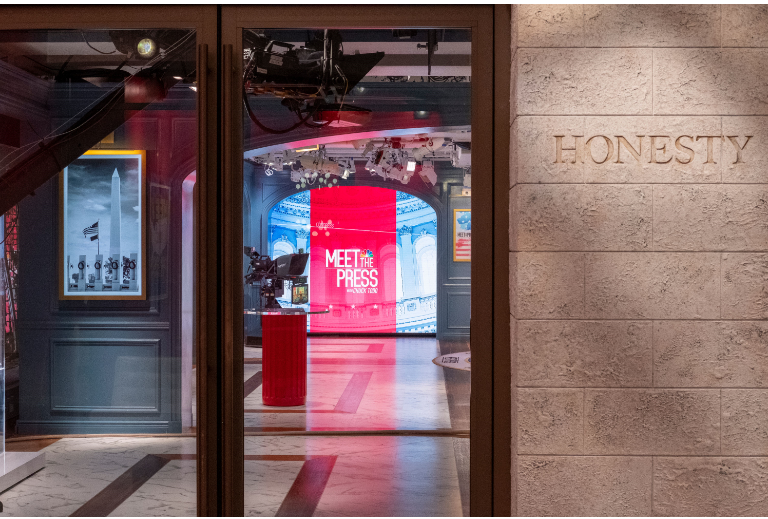