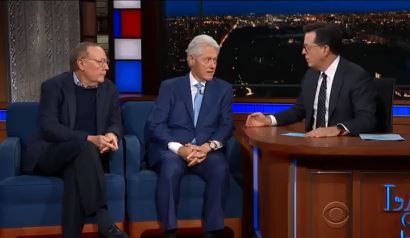 NBC’s Today show is firing back at former President Bill Clinton after he claimed NBC edited Craig Melvin’s interview with him to, at first, make it appear as if Clinton hadn’t apologized for his actions involving Monica Lewinsky.

“When I saw the interview,” Clinton said on Stephen Colbert’s show last night, “I thought that because they had to, you know, distill it, and it looked like I was saying I didn’t apologize and I had no intention to. And I was mad at me.”

“They showed a film clip finally,” Clinton said, adding, “Here’s what I want to say. It wasn’t my finest hour, but the important thing is, that was a very painful thing that happened 20 years ago. And I apologized to my family, to Monica Lewinsky and her family, to the American people. I meant it then. I mean it now.”

“The tape speaks for itself,” said Savannah Guthrie, to Melvin this morning on Today. “You of course did not assert that he never apologized, you asked whether he apologized.”

Here’s the segment from Today: