NEXT:Last Night's Trump Rally Had the Look of a College Football Pregame Show
PREVIOUS:Lester Holt Tells Students Not to Be Afraid of Healthy Debate ... 'Our Ideological Differences Have Served Us Well'

Per Nielsen live-plus-same-day data, that’s never happened before, so the network is celebrating. It has an ad appearing on a Times Square billboard today citing its successes, and another one running in The New York Times on Monday. The billboard, at 46th & Broadway, happens to be just steps away from where Good Morning America broadcasts each morning.

We’re also being told that there will be a pizza party at 30 Rock, and one at each of the network’s bureaus next week (we haven’t received our invite).

NBC News, along with its president, Noah Oppenheim, is fired up about these wins. Considering what the news division has experienced in the past year it’s happy to have a reason to celebrate.

“I think the key to our success has been our investment in original journalism,” Oppenheim tells TVNewser. “We’re booking exclusive live interviews that people want to see. So I think it’s the quality of that work that allows us to stay on top.”

The success includes personalities like Chuck Todd, moderator of TV’s No. 1 Sunday political program, Meet the Press. MTP has ranked No. 1 across-the-board for two consecutive seasons, and prior to last week was No. 1 across the board for 11 consecutive weeks.

“First and foremost, Chuck Todd is an extraordinary political mind,” said Oppenheim. “A great interviewer, a tremendous moderator of that program in the best tradition of Sunday morning TV. There’s nobody better at confronting powerful people and politicians with tough questions.”

We’re roughly 10 months removed from the firing of Matt Lauer after “a detailed complaint of inappropriate sexual behavior,” and Oppenheim says NBC News is thrilled with how Hoda Kotb and Savannah Guthrie have gelled in the flagship 7-9 a.m. weekday slot.

Today show remains No. 1 in the demos, though after getting off to a hot start with Savannah and Hoda at the table (and now Craig Melvin), it has seen a bit of a ratings decline versus this time last year.

“To think of the difficult transition that it went through a year ago, and compare that to the incredibly strong place where it is now in, it’s a testament to Savannah and Hoda and their extraordinary talent, and what they’ve been able to do on-air and in relating to the audience,” said Oppenheim. “The team of producers that put that show together, led by Libby Leist, are the best in the business at booking the exclusive interviews that people want to see.”

Megyn Kelly Today is wrapping up its first season. NBC News paid a pretty penny to bring Kelly on-board, and Oppenheim says the 9 a.m. show “is substantive, and it’s engaging.” He noted that Megyn Kelly Today “is still trying to find its rhythm and find its audience,” but said he’s pleased that there seems to be a ratings uptick in recent months.

NBC Nightly News, which dominated the evening news landscape for decades, continues to lead its counterparts in the demos, but has fallen to No. 2 in total viewers. In fact, the broadcast has now finished second in total viewers for back-to-back seasons after winning 21 consecutive seasons across the board. It is also seeing its lead over ABC in the demos slip just a bit relative to recent years.

“Obviously, we wish we were winning in every category,” admitted Oppenheim, who has yet to name a permanent ep for the program after the departure of Sam Singal. “We’re focused on the category that counts, and that’s the demo and we continue to dominate there.”

Oppenheim added that he wants to give the audience “original content that they can’t find anywhere else,” at 6:30, and to help them to make sense of it. “There’s nobody better at that than Lester and his team of correspondents on Nightly News,” he proclaimed.

But there’s also the elephant in the room. Before CBS News was hit with a haymaker in the form of Jeff Fager departing CBS News after violating company policy, and a pair of Ronan Farrow New Yorker stories about the goings on at that news division, the media spotlight had been on NBC News, which was grappling with plenty of internal issues of its own. That includes the Matt Lauer saga last November and the allegations made in the past month by former NBC Newser/acclaimed investigative reporter Farrow and his producer Rich McHugh that NBC News shut down Farrow’s investigation into Harvey Weinstein.

NBC News chairman Andy Lack has previously said that at no point did NBC News try to obstruct Farrow’s reporting or “kill” an interview, going against what Farrow and McHugh stated, and what The New York Times and The Daily Beast previously reported.

What is the state of NBC News right now? What is the company doing to ensure nothing like this happens again?

“I think we’re all, in the culture, more sensitive and aware to these issues that have surfaced and want to make sure that we are providing a work environment that’s safe and comfortable and supportive of everyone,” said Oppenheim. “We have spent a lot of time looking at all of our processes and procedures to make sure that our training, to make sure that employees know how to surface issues if they have them; feel encouraged in doing so, and make sure that those issues are dealt with swiftly and fairly.

I think we feel good about that dialogue that we’ve had with our colleagues. We feel good about the processes that we have in place,” Oppenheim continued. “I think that the focus here is on doing good work, and I like to believe people feel like they work in a supportive place.” 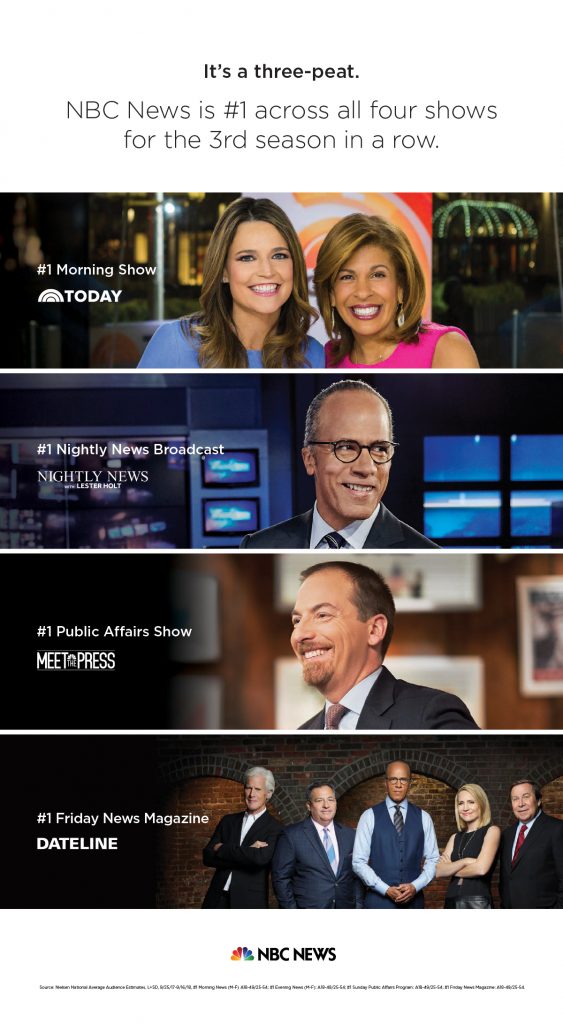