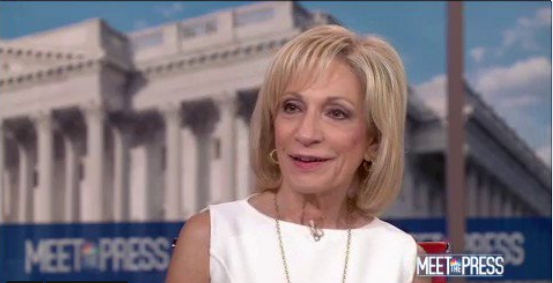 Towards the end of today’s broadcast of her MSNBC program Andrea Mitchell Reports, there was a special surprise for the trailblazing TV newser, a video tribute with well-wishes from several influencers and politicians she’s worked with and covered over the years.

WATCH: @mitchellreports turns to @PeterAlexander and @kwelkernbc for “breaking news” report: a surprise celebration of her 40 years at @NBCNews — including appearances by VP Biden, Billie Jean King, @LesterHoltNBC, @tombrokaw, @chucktodd and more. pic.twitter.com/hFyqlUR198

Here’s Today show’s tribute to Mitchell from this morning. The show’s ep, Libby Leist, started her NBC News career as a researcher for Mitchell.

This past Sunday, Meet the Press with Chuck Todd commemorated Mitchell’s 212th appearance on the show, with a look back at her 211 appearances:

WATCH: mitchellreports celebrates 40 years with nbcnews and over 200 appearances on Meet the Press pic.twitter.com/csCm5ENJdO

Congratulations, Andrea Mitchell! Watch @AliVelshi and @SRuhle hand over their show to @mitchellreports on her 40th anniversary at NBC: pic.twitter.com/vzDhxZrsYE

Mitchell sat down with Trevor Noah yesterday on The Daily Show to talk about her 40 years at the network, and foreign affairs in the era of Trump:

“I don’t feel that I am the ‘enemy of the people.’ This is something that we first heard from Joseph Stalin. This is very dangerous.”

Come for the barrier breaking/news breaking/back breaking inspiration, stay for the hairdos — right @mitchellreports? This is an amazing testament to a legend. WATCH! https://t.co/tiuUcs6QqU

Congratulations @mitchellreports on 40 years of doing the hard, necessary work of keeping the American people informed. We need your voice now more than ever.

Wishing the very best to @mitchellreports as she marks 40 years at NBC! pic.twitter.com/zcEZq9292s

Happy 40 year anniversary to the very talented @mitchellreports. Your dedication to a free press and the search for the truth is an example for our times.

Andrea took me on my 1st trip for NBC as her then-new researcher. It was to Maine & Seeds of Peace camp, where Andrea gave voice to the people—these wise, young Israelis & Palestinians caught in war back home. #40years of @mitchellreports. Andrea’s stry: https://t.co/qRw4RBJ7rD pic.twitter.com/AAzvyWbjym

I still can’t believe you write back to my emails. It surprises me every time.

Thank you for being an extraordinary colleague and friend. https://t.co/VJ8yYffpdO

Smart, kind, generous and so much more .@mitchellreports congrats on 40 years and thank you for inspiring and encouraging so many of us to be and to do better every day. #40moreAndrea https://t.co/2ywirHCgxG

Also, Clay from Sons of Anarchy weighed in!

Sorry @mitchellreports …we know how much disdain you have for attention being called on yourself; but that is the very thing that makes you the best in the distinguished business of journalism…The IS no Andrea, there is only the story.

Congrats on 40 years at NBC. #ClassAct