Cesar Conde is setting an ambitious goal (or two) as he steps into the new role of NBCUniversal News Group chairman.

In a memo to staff released today, Conde writes that the organization aspires to achieve “two concrete goals: that 50% of our news organization employees be women and 50% of our total workforce be people of color.”

He is calling this the Fifty Percent Challenge Initiative.

“To achieve these goals, we have developed a detailed action plan based on your feedback in our many discussions,” Conde writes. “This plan has five pillars: investment and recruitment, content, education and development, partnerships and measurement.”

Conde added that various teams across the News Group will meet “within the next week or so” to discuss the new plan, and that over the next 100 days, he will ask all NBC News Group staffers for “feedback on our action plan and how we should hold ourselves accountable.”

He adds: “At the end of those 100 days, we will reconvene as a group to review our progress, potentially add to the plan, and collectively decide on the key metrics to track our progress.”

Conde was named leader of NBC News Group on May 4 after a successful tenure running Telemundo Enterprises. In his new role, he will oversee not only NBC News and MSNBC, but also CNBC. NBC News president Noah Oppenheim, MSNBC president Phil Griffin and now CNBC chairman Mark Hoffman will all report directly to Conde. Hoffman had previously reported directly to outgoing NBCU chief executive Steve Burke and not directly to outgoing NBC News Group chairman Andy Lack, as Oppenheim and Griffin previously had. 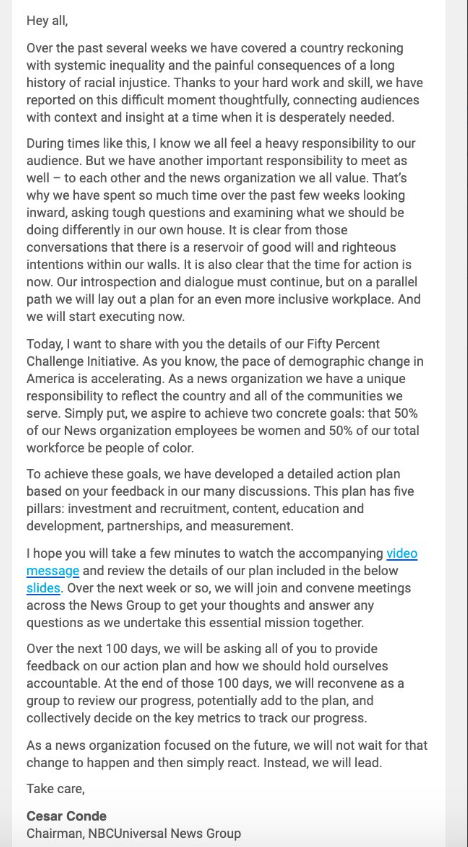