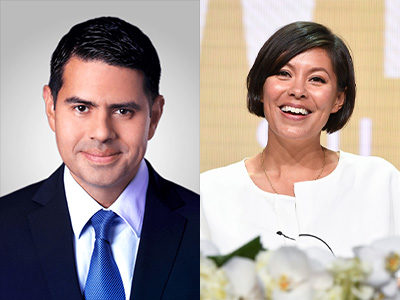 NBCU News Group Cesar Conde is one of the many business leaders attending the Aspen Ideas Festival this week. During the event, he sat down with the Financial Times’ Gillian Tett, where they discussed various topics, including MSNBC’s primetime moves.

In particular, Alex Wagner’s appointment as the new primetime host for the 9 p.m. ET slot, four days a week.

MSNBC, on Monday, officially named Wagner as Maddow’s replacement for the 9 p.m. hour, four days a week, Tuesday – Friday. The news comes after Maddow announced earlier this year that she would be stepping down from doing the daily version of her show, to focus on other projects she has lined up.

As part of the reported $30 million per year contract she signed with NBCUniversal last summer, Maddow will continue to host The Rachel Maddow on Mondays at 9 p.m. ET and be part of any special coverage, breaking news events, and specials on MSNBC and streaming.

When talking about Maddow’s recent moves, Conde said, “It frees up someone who has an incredible following to now do, yes, live cable TV, but it also allows her now to do podcasts.”

He continued, “It allows her to now do programs for us on our streaming platform. It allows her to work on documentaries and longer-form series, which we think is extraordinarily important because we have so many more touch points.”

This is Wagner’s second stint with MSNBC; she hosted a daytime news show, Now with Alex Wagner, from 2011 to July 2015. Prior to this announcement, she could be seen on the Showtime weekly political docuseries, The Circus. She’s also worked as a senior editor for The Atlantic and as a special correspondent and co-host of CBS This Morning: Saturday.

Wagner will make her primetime debut on August 16.