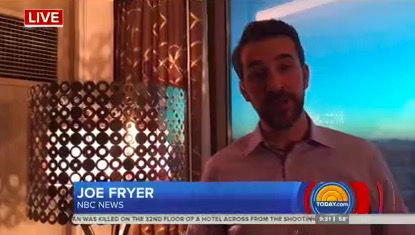 NBC’s Joe Fryer was in Las Vegas over the weekend covering O.J. Simpson’s release from prison. He happened to be staying in the Mandalay Bay hotel, on the 38th floor, 6 floors above where killer Stephen Paddock built up an arsenal in his hotel room, then killed dozens of people Sunday night.

“We’re in lockdown,” Fryer reported in the early hours of coverage Monday. Fryer was staying in the upper floors of the Mandalay Bay tower which is a Four Seasons hotel. “We’re on the 38th floor. The 32nd floor, just six floors below us, is where authorities say the gunman was opening fire on the crowd down below.”

Fryer was back on the Today show this morning reporting on how he, his crew and other hotel guests spent hours on lockdown. “There’s police with tactical equipment, going through floors checking things out,” Fryer said of the experience.