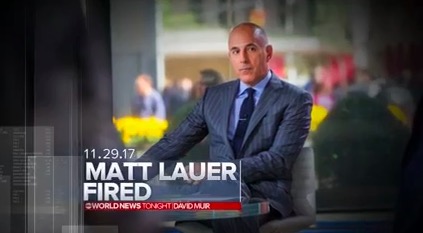 NBCUniversal is launching an internal review of how it happened that complaints about Matt Lauer’s workplace behavior may have gone unrecognized for years.

“At the conclusion of the review we will share what we’ve learned, no matter how painful, and act on it,” said Lack, whose name will likely come up in the review. He rejoined NBC in 2015, but had been NBC News president for 8 years, including when Lauer was promoted to Today show co-anchor in 1997.

Lauer, who was NBC News’ highest paid employee, was fired Tuesday night after 25 years at the network. The firing came 24 hours after an accuser came forward with a complaint of sexual misconduct.

In his note, Lack wrote that, in addition to the “thorough and timely review,” the company is establishing “mandatory online training for all employees on sexual harassment and other workplace issues.” Lack is also encouraging team leaders to hold “smaller, more informal gatherings to further discuss this crucial issue now and on an ongoing basis.”

And, as we have done regularly over the last few months, but cannot do often enough, we want to remind you again that we encourage all employees to speak up and raise any concerns you have about inappropriate conduct you have experienced or observed. We also want to reinforce with our managers and leaders their responsibility to bring forward concerns about inappropriate workplace behavior they see or hear about. It is always the right thing to do, and any concerns raised should be done without fear of retaliation, and with full assurance that they will be investigated.

“This has been a very tough week for all of us,” Lack writes. “Thank you again for your honest feedback.”