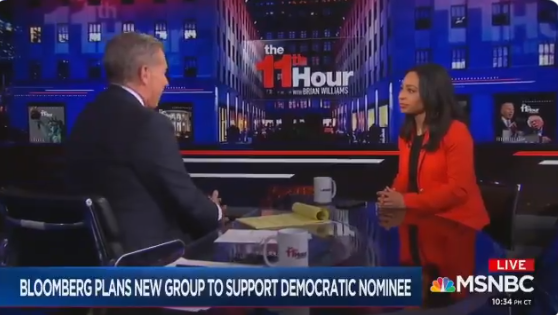 New York Times editorial board member and MSNBC guest Mara Gay appeared on the Brian Williams-hosted program, and remarked, “Somebody tweeted recently that actually with the money he [Mike Bloomberg] spent he could have given every American a million dollars.”

Williams responded, “Let’s put it up on the screen.”

how did this end up on tv? pic.twitter.com/xUYIOChhKv

“When I read it tonight on social media it kind of all became clear,” said Williams. “Bloomberg spent $500 million on ads. U.S. population 327 million. Don’t tell us if you’re ahead of us on the math. He could have given each American 1 million dollars and have had lunch money left over. It’s an incredible way of putting it.”

“It’s an incredible way of putting it,” Gray reiterated. “It’s true. It’s disturbing. It does suggest what we’re talking about here, which is there’s too much money in politics.”

According to a tweet by Yahoo Finance columnist Rick Newman, if the former New York City mayor and former presidential candidate decided for some reason to give his money to every American, he could instead reportedly give each person just $1.52—a figure slightly less than $1 million.

Just so everybody knows here’s the real answer

Bloomberg could have given every American $1.52

Brian Williams and his team were off by 6 zeroes https://t.co/d0gilpBCxc

Williams did address the screw-up later, saying on-air: “Turns out Mara and I got the same grades at math. I’m speaking of the tweet we both misinterpreted. He could give each American $1 … I stand corrected. Sorry about that. The tweet is wrong.”

Tonight on the air we quoted a tweet that relied on bad math. We corrected the error after the next commercial break and have removed it from later editions of tonight’s program. We apologize for the error.

Despite the correction, “Brian Williams” started trending overnight and has continued to trend through Friday morning. As of 11:15 a.m. ET, the video, originally posted by American Philatelic Society’s Scott English, and tweeted out to the masses by CNN’s Andrew Kaczynski, has 4.7 million views, about 12 hours after the segment originally aired.

Tonight on the air we quoted a tweet that relied on bad math. We corrected the error after the next commercial break and have removed it from later editions of tonight’s program. We apologize for the error.