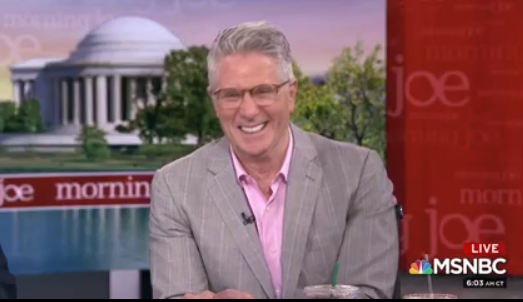 MSNBC announced today the premiere of Saturday Night Politics with Donny Deutsch, tomorrow at 8 p.m. ET. The new program is part of MSNBC’s expansion of programming on the weekends.

Saturday Night Politics will feature one-on-one interviews with politicians and newsmakers, including an interview with Mayor Pete Buttigieg to air this Saturday.

MSNBC has aired a myriad of programming in the 8 p.m. Saturday slot, including re-runs of All In with Chris Hayes, and Headliners, a docuseries profiling the top newsmakers in recent weeks.

Deutsch is a longtime MSNBC contributor who Morning Joe audiences have gotten used to seeing in recent years.

He also had a brief stint as an MSNBC anchor in 2010, but was pulled as a result of a segment where he seemed to criticize his colleague Keith Olbermann.

Prior to that, Deutsch hosted the CNBC talk show The Big Idea with Donny Deutsch from 2004-2008.

He hosted Love Calling on Bravo in 2011, where he served as a dating expert.

Then, there was that prime time CNN talk show The Point, which was cancelled after just one week in April 2013. He hosted a show on USA named Donny!, where he basically played a fictionalized version of himself, in 2015. It lasted only one season.

Adweek readers probably best know Deutsch from his agency background. His father, David founded Deutsch Associates and Donny Deutsch joined the company in 1983. He became chairman of the company –renaming it Deutsch Inc.– in 1989. He then sold Deutsch Inc. to Interpublic Group in 2000 for a reported $265 million.